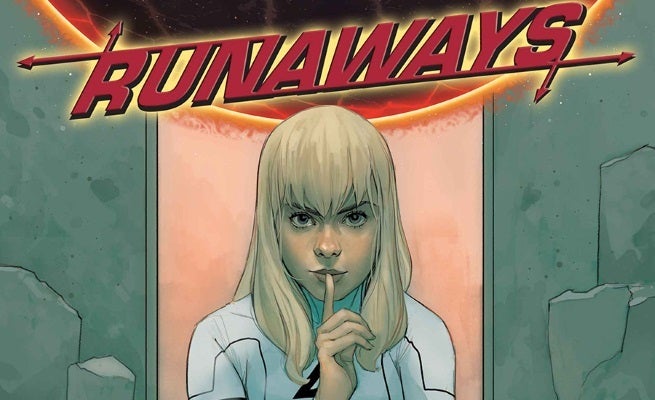 While the series shares a name and a spirit with the original Brian K. Vaughan and Adrian Alphona created series, it will feature none of Vaughan and Alphona's characters. Instead, the team of Runaways found on Battleworld is made up of versions of young heroes from across the Marvel multiverse: Valeria Richards, Jubilee, Cloak & Dagger, Bucky Barnes, Amadeus Cho, Skaar, and new character Sanna.

"Most of the characters are established Marvel teens," Stevenson tells CBR, "but you'll find them a little different here. Although characters from many different teams will be represented here, this team is entirely its own, new thing and they'll all be called upon to play a role in it that they probably haven't before. I've been referring to them informally as The Breakfast Club, because they're a group who wouldn't necessarily choose to hang out with each other under normal circumstances -- and actually outright hate each other in a few cases -- but end up having to work together to survive and find out that they have more in common than they thought.

Unlike other Battleworld books, Runaways won't focus on any one region of Battleworld. Instead, the book takes place in Battleworld's capital city, where many of the planet's cultures meet and clash. There the Runaways attend a school run by a supervillain, though Stevenson isn't saying which one.

Secret Wars kicks off in May, and Runaways #1 begins in June. You can see some of Greene's concept art, as well as Phil Noto's full cover for Runaways #1 – an homage to Jo Chen's cover to the original Runaways #1 – in the gallery below.