The Marvel Universe better brace for impact, because the Hulk is ready to rampage all over it once again!

Marvel just announced that Greg Pak and Carlo Barberi are kicking off World War Hulk II, the sequel to the immensely popular World War Hulk storyline from 2007. The sequel will star Amadeus Cho in the leading role, bringing him back to Earth from his time on Sakaar. Suffice it to say the world is nowhere near ready for his return.

Since his encounter with Bruce Banner in Generations, Amadeus has struggled with what being the Hulk means for him and the people closes to him, as well as the people he claims to protect. Since being on Sakaar he's let some of those restraints go, and he is coming back to Earth a very different person than when he left. 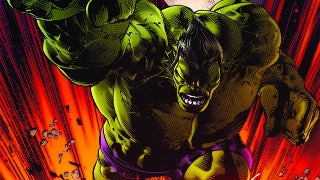 “What follows Planet Hulk II?” asks Executive Editor and SVP Tom Brevoort. “World War Hulk II, of course! To the savage world of Sakaar, Amadeus Cho was forced to unleash his darkest impulses! Returning to Earth, now the Hulk is at the wheel—and it’s a more unpredictable, more unconquerable Hulk than any we’ve seen before! The heroes of the Marvel Universe must intercede as the Formerly Awesome Hulk begins to carve his own path across the world.”

The original World War Hulk took place after the even more popular Planet Hulk storyline, which saw Marvel's Illuminati send Hulk off into space. He was destined for a paradise planet, but instead got misdirected to the planet Sakaar, where he battled for superiority in the arena against other Gladiators. He would eventually lead a resistance to reclaim the land, but would also find love. Unfortunately meddling from an unlikely source resulted in her death, resulting in an enraged Hulk returning to Earth to bring justice to those who sent him in the first place.

While the true culprit is revealed in the end, Hulk devastated the heroes of the Marvel Universe before all was said and done, and it looks like Amadeus Cho will follow in Banner's footsteps.

Loki: More Music From the Soundtrack Is Now Available on Spotify