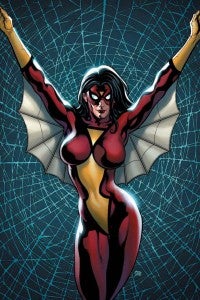 Ever since she reemerged with a vengeance in the pages of New Avengers, Jessica Drew, AKA Spider-Woman, has garnered attention from not only fans who remember her solo series from the late 1970's until the early 1980's, but also new fans who are enjoying the intriguing double (or is it triple) life she was leading as Avenger, Skrull and ears/eyes for Nick Fury up until recent events put her life into a tail spin. And then there's that whole HYDRA bit! The dust has settled on the Skrulls with the events of Secret Invasion, and now Dark Reign is upon us, and out of this the long-awaited new solo series Spider-Woman is emerging. Anticipation is high, as well as expectations, as Brian Michael Bendis will pen the first issue, setting a solid bar for the series in its debut. While a few details are emerging about the early direction of the series, mainly Jessica Drew putting her life back together after being impersonated during the Secret Invasion by no less than the Skrull queen, there are a few things that I, as a life-long Spider-Woman fan, wouldn't mind seeing in this new series. And none of them involve strange pyramids (thanks crazy Spider-Woman animated series!) 1. No return to magic While this might be a moot point, given the focus on Spider-Woman's ties to HYDRA, Nick Fury, and other espionage stories in recent issues, I just have to say aloud that I am looking forward to having a Spider-Woman series that doesn't dip so much into the realm of magic. In her first solo series, Spider-Woman spent a good portion of her fifty issues battling Arthurian sorceress Morgan le Fey and dealing with adventures on the astral plane. This Spider-Woman, a battle-tested master agent of, well, any organization, shouldn't see her adventures take that journey anytime soon, especially since she's getting plenty of the supernatural right now in the pages of New Avengers with the new Sorcerer Supreme. The inclusion of magic seemed at times at odds with the detective work she was doing in the first series, and I am confident we won't see too much magic here. 2. Create a new rogues' gallery! One of the things I appreciated about the first Spider-Woman series was the sometimes kookiness of her villains, especially ones that related to insects such as Gypsy Moth, a mutant with the power to control materials (fabrics and such) and Daddy Longlegs, a frustrated dancer with a height of fifteen feet and skillful agility. The world that Bendis will have her stepping into is rife with opportunity for enemies that Spider-Woman may not have even known existed before to step into the light, emerging from the shadows of her past. Jessica has also made powerful enemies in a Norman Osborn run world, and there are at least a couple of Dark Avengers who would make ideal recurring enemies for her; Ms. Marvel (Moonstone) with her overt arrogance and will to lead and Bullseye with his rogue inclinations towards violence. There's also a great amount of potential for new, super-powered villains to be created and used in a top-tier book with a series such as this! 3. Turn on the dark! A key reason that the Skrull queen's deception was so complete during the Secret Invasion was because like Jessica Drew a good degree of deception and knowing how to manage complicated relationships had to exist. This led to some very interesting and dark storylines in New Avengers, and coupled with her past as an agent of HYDRA and her days as a detective, this new series could be one of Marvel's more noir-ish titles to date, full of action, hard-boiled, loner inner-dialogues and lots of interesting personal relationships as Spider-Woman struggles to live in a world that views her as the face of one of the greatest threats the Earth has ever faced. Going along with part of what I talked about in item two on this list, a darker tone would help eliminate the risk of some kooky villains and pave the way for a series full of grit and a working through of the problems Jessica will certainly face for the time being. With this being one of the biggest Marvel releases of the year, Spider-Woman is set to be one of the premiere heroines in the Marvel universe. Brian Michael Bendis has made no secret his adoration for the character, so hopes are high and excitement rampant. I for one will be picking up the first issue, and while wishes are certainly on everyone's mind, I'm feeling pretty good, as a fan of the winged venom-zapper, about mine coming true!