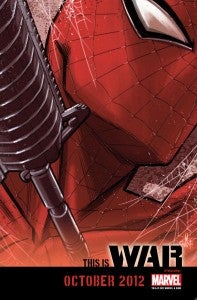 Marvel Comics has released another This Is War teaser today, one that may be a game-changer in terms of the way people have been discussing the story so far. Spider-Man appears in this image, appearing unconscious and with the barrel of a gun pointed at his chest. The image, which is in the style of Civil War's Steve McNiven, also shows Spidey covered in cobwebs. The thing that's interesting, of course, is that gun. So far, most fans have been assuming that the "war" being announced would be the Ultron War by Brian Michael Bendis and Bryan Hitch, but Ultron really has no need for machine guns. Does this mean that Ultron will be working with allies, or just that we've all been assuming we knew more than we actually did? Whatever it is, we'll find out at the San Diego Comic-Con's Amazing Spider-Man panel.