With less than month until Avengers: Age of Ultron, ComicBook.com is launching "Avenging April." Each Thursday, we'll discuss a nugget of Avengers history, whether it be from comics, animation, or video games. First off, we're going to address the much maligned Avengers: United They Stand animated series.

Before the Avengers came to the big screen, before Avengers Assemble, and way before Earth's Mightiest Heroes, there was this Marvel misfire: Avengers: United They Stand. Finding most inspiration in the West Coast Avengers, Avengers: United They Stand featured an eclectic roster of Hawkeye, Tigra, Vision, Scarlet Witch, Falcon, Wonder Man, Wasp, and leader Hank Pym as Ant-Man. If you weren't familiar with the characters, then bummer, as the intro didn't assist much in bringing you to-speed. You were probably even more confounded when the "trinity" of Captain America, Iron Man, and Thor were included in the intro, but were not part of the main roster and degraded to cameos....except Thor, who didn't even get that. Due to possible Cap, Iron Man, and Thor movies, the show was roadblocked by licensing issues and they couldn't utilize the characters.

The show was built around Ant-Man's insecurities as leader, and how he might become a worthy-enough Avenger and field leader. A: UTS also made some interesting (read: poor) deviations from the rest of the characters. As a response to both Batman Beyond and Spider-Man Unlimited, which took their characters into the future, A: UTS strayed away from actual comic canon. Some examples include Tigra's altered origins, taking away her mystical background turning her into a genetic expirement gone horribly wrong. It was probably a more comprehensive approach, but that trope was already beaten dead in Batman: The Animated Series.

A: UTS also exploited the future as an excuse for the team to done battle armor with some of the worst designs imaginable. The fact that Hawkeye has to wear heavy armor is a thing in itself. I'm pretty sure archers don't really succeed all that well when they're encumbered by Liefeldian plate armor, but that's just me. 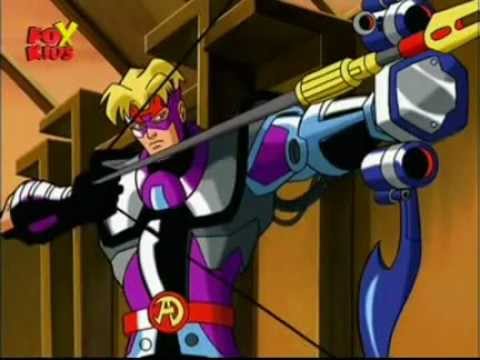 It's just...messy to say the least. Hawkeye almost looks like Shaft from Youngblood, and I'm still unsure if that was intentional or not. Falcon donned unnecessary armor as well, and everybody had this transformation sequence each time they armored up that would make the Power Rangers shake their heads. The villains were just as ugly, but none had it as bad as Kang.

The coloring job aside, Kang looks more like Annihilus than anybody else. The villain roster the Avengers faced was impressive for the time, including the Masters of Evil, the Ringmaster, the Grim Reaper, and the Swordsman. Oh, wait, that's not impressive at all. Quite the opposite, in fact. True, Ultron did make some appearances, but he was never presented as an actual threat.

Of course, with an animated series comes a toy line. And did A:UTS have the best commercials for these toys!

It's strange that they would have a Captain America figure, when he was only featured in a single episode. But, what's even weirder were the Thor and Loki figures made to coincide with their second season debut.  But unsurprisingly, the show never made it that far. 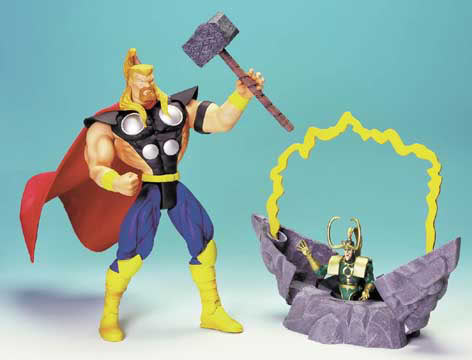 Still: Look at that torso and despair.

Staying in vogue with Marvel and DC's other animated properties, A:UTS had a comic-adaptation as well. (For the record, I still can't think of anything more meta than a comic series base off of a cartoon, based off a comic series.) The comic lasted for seven issues before low sales sealed its fate, but it made good use of them. Thakfully, it filled in some of the narrative gaps that the show left alone. Explanations like why all that armor was necessary in the first place (it uses Pym Particles to reduce injury), and why Black Panther left the team--Answer: T'Challa found Ant-Man's leadership  to be subpar, and actually refused to rejoin the team as long as he was in charge. Yikes. 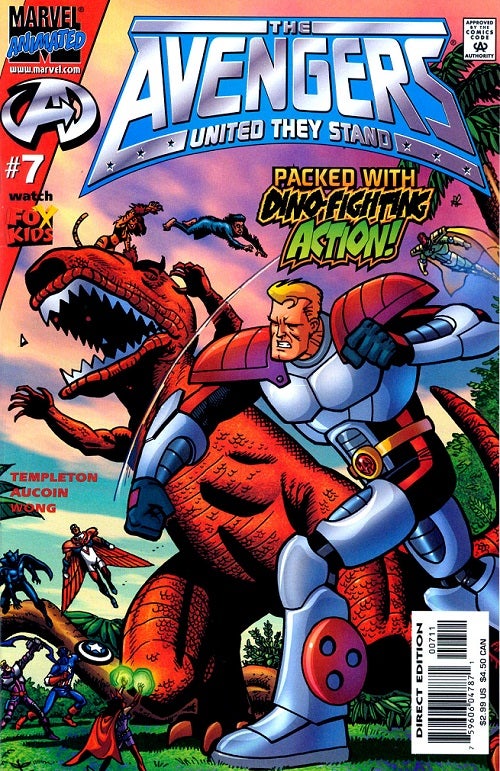 But there's something about Giant-Man punching Devil Dinosaur in the face that just seems so right.

Avengers: United They Stand should have been a launching pad for the Avengerss small screen debut, and a semi- precursor to the Justice League show that aired just a year later. But with 13 episodes that were essentially panned across the board, it just wasn't meant to be.

But what say you, ComicBook.com readers? Do you remember this short-lived series? Did you buy any of the toys or comics? How does this show stack up to Earth's Mightiest Heroes, or Avengers Assemble? Let us know in the comments!