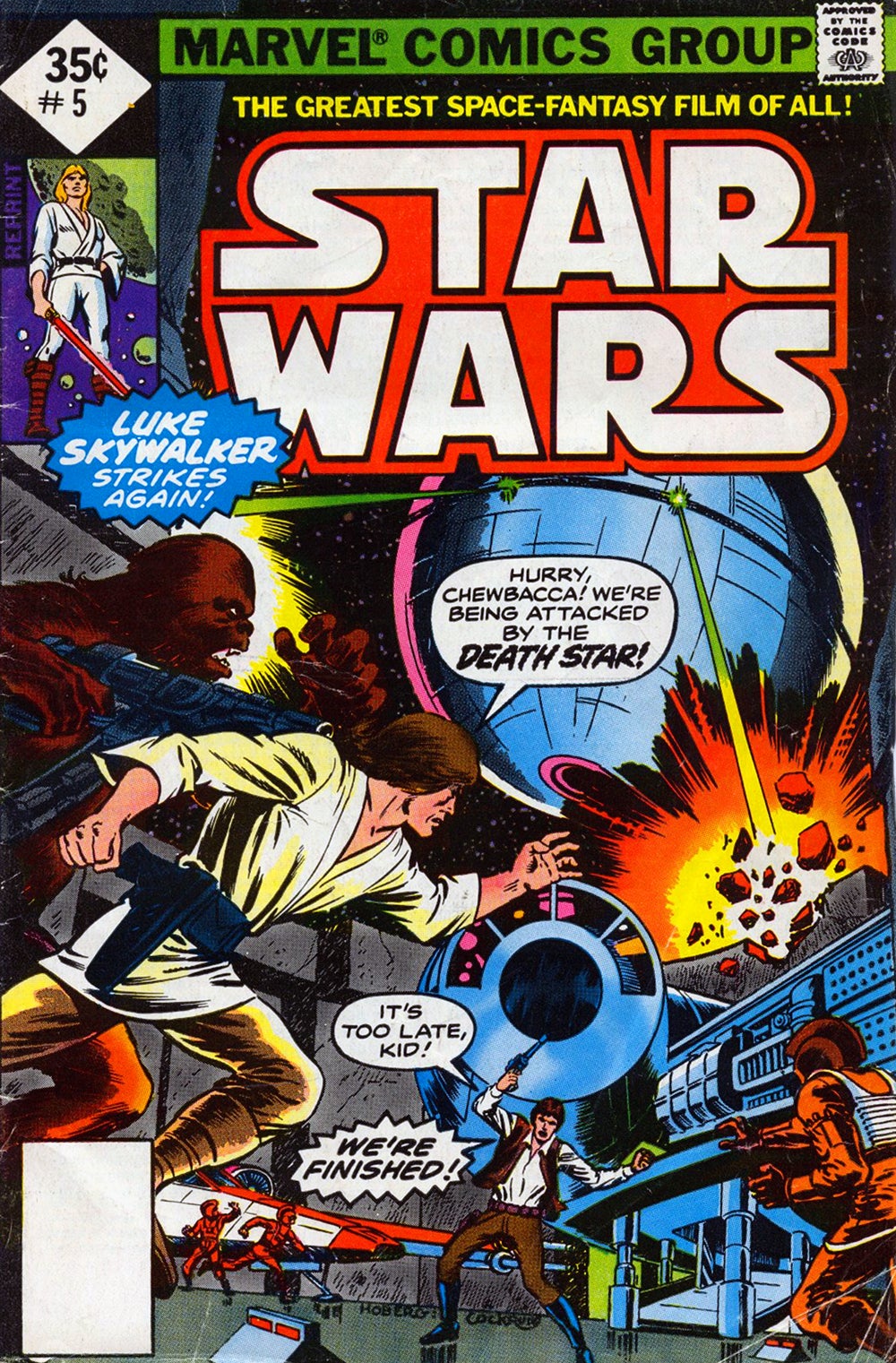 At the end of the previous issue, which was comprised of 17 pages of nonstop action, I wondered how in the world this adaptation could possibly go on for two more issues. Now I know; this one installment covers just 12 minutes of "Star Wars." Yep, they apparently have decompressed storytelling in a galaxy far, far away.

This issue's decompressed style isn't a bad thing. In fact, it's only decompressed by comparison. The first issue crammed 29 minutes of pure exposition (with a side of blaster fire) into the same amount of pages, creating a first issue that felt pretty rushed. This issue reads more like a comic; it acknowledges that moving pictures can deliver information much quicker than panels on pages and instead focuses on letting those 12 minutes breathe.

Still, the quietest issue of "Star Wars" so far is paired with another delightfully over the top cover—perhaps the most ridiculous one yet. I have no idea what information Rick Hoberg and Dave Cockrum were given about "Star Wars" or the issue itself. This issue hit stands somewhere around September 1977, so the film itself had already been in theaters for at least four months. Everyone involved with this had to have known that at no point is there a scene where the Death Star enters Yavin 4's orbit and starts blasting Rebel troops. But hey—it's an exciting cover and it kinda makes me wish this scene had happened in the movie.

The issue picks up a few seconds after where we left off, after the Millennium Falcon has detected incoming enemy fighters. 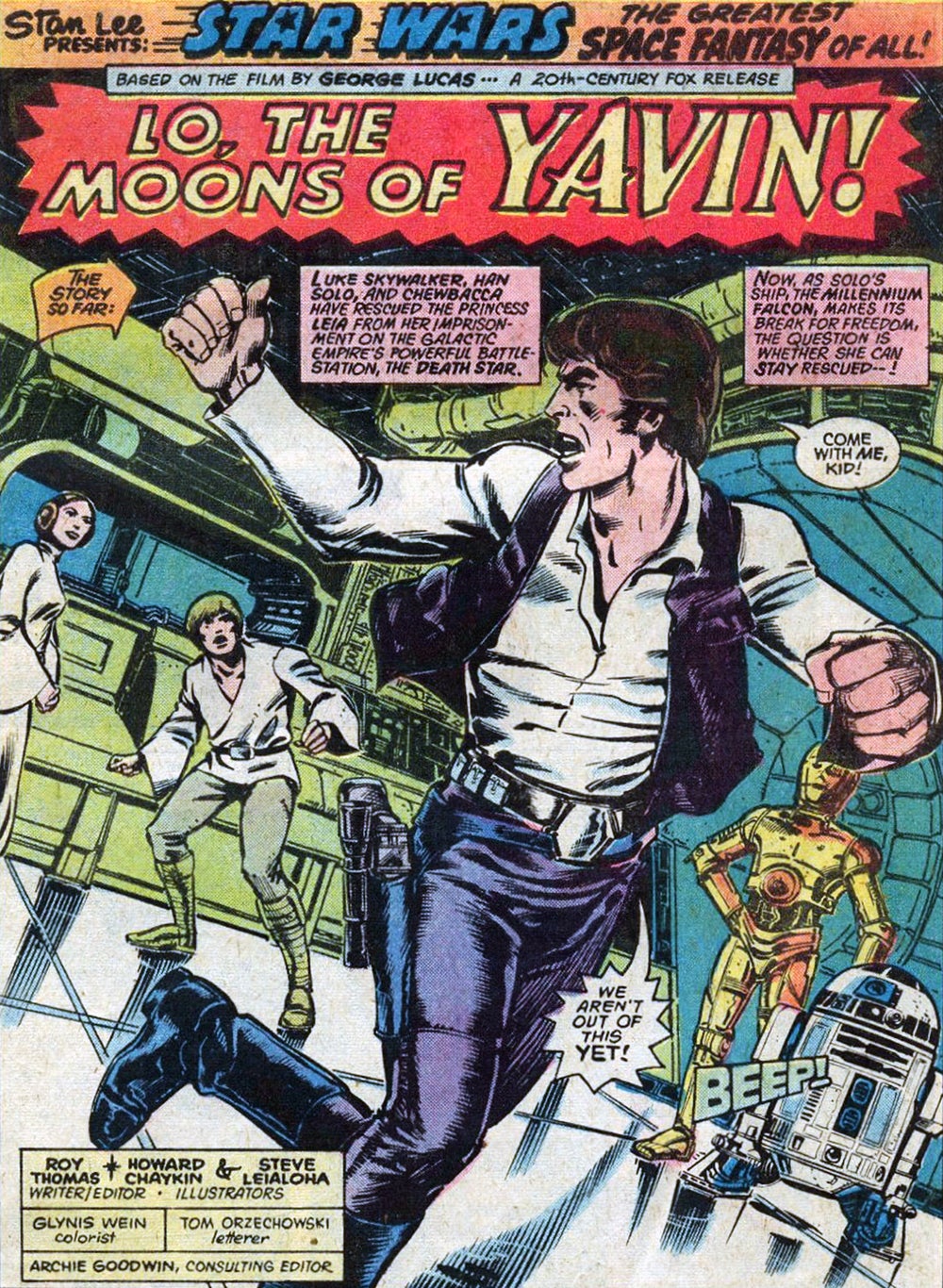 The opening splash pages in each issue usually impress me, and Chaykin delivers again with this one. The frame's tilted slightly to the right, implying a frantic sense of motion as Han takes off running. I even love how big his left fist is. It's practically leaping off the page! Hey Han, be careful with that fist, I'm just trying to read a comic.

As Han and Luke settle into the gunner stations and prepare to take on the TIEs, Roy Thomas lets the gravity of the situation sink in for three panels. Luke pledges to try his hardest, even though he's never used the Falcon's specific type of gun before, and he'll do it "for Ben Kenobi!" Han has a rather honorable thought about not letting Obi-Wan's sacrifice be for nothing, while Leia expresses both dread and cautious optimism. The inner monologue-athon freezes when it gets to Chewbacca, and the narration basically just says, "eh, no clue."

Like previous issues, this one also has another weird description of the Force—or should I say "The Force"? This time Thomas says that Luke can tap into the energy field by "getting in touch with himself—and thus all mankind." That's maybe the most hippie-fied description of the Force I've ever heard. I really wish Ben had taken this viewpoint during his one Jedi lesson with Luke. "Just close your eyes and, you know, listen to yourself, man," he'd say in a chill tone. "As the prophet John Lennon sang, 'I am he as you are he as you are me and we are all together.'"

Vague spirituality isn't the only religious bit we get during the TIE fight.

We should all be very thankful that Thomas did not go for the glaringly obvious, "space-mercenaries, too, can pray—and also prey!" line as Han shoots down Imperial fighter after Imperial fighter. But yeah, the Han Solo that just a few issues earlier rolled his eyes at the mention of hokey religions admits that even he gets down on his knees—at least metaphorically—when faced with death. Also, can't let it slip by that the narration calls Han a "space-mercenary" which implies that mercenaries have distinctions based on where they practice their trade. You know that somewhere in the galaxy there's a merc that proudly calls himself the Suburban-Mercenary.

With the help of "The Force" and whichever god Han's in good with, the Falcon escapes the dogfight. We then cut back to the Death Star for a scene, and something's noticeably different. 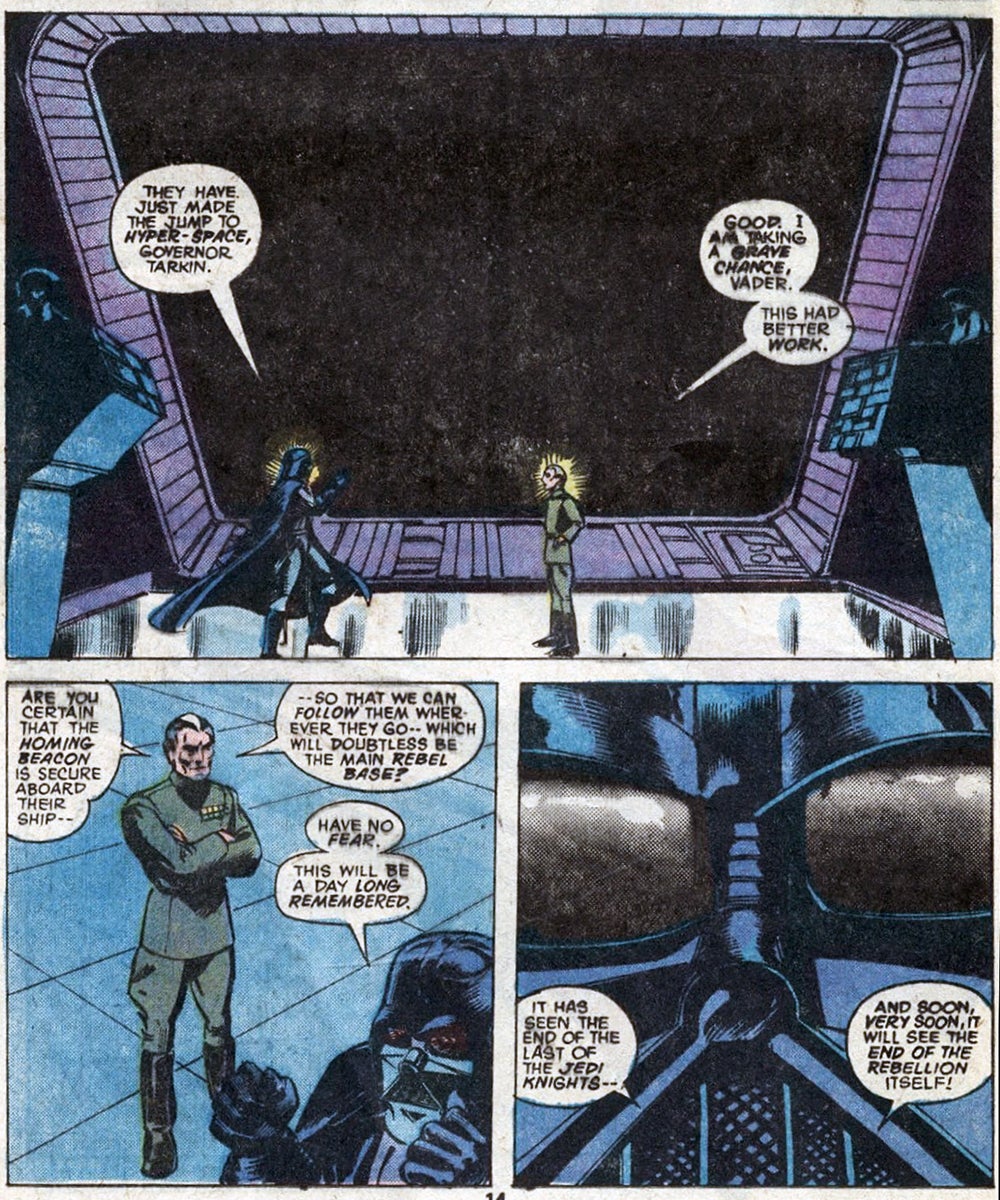 The Death Star is Death Star colors! Okay, it's purple and blue—but still, it's deep purple and metallic blue! The legendary Glynis Wein (née Oliver) took over coloring duties for this issue. I'm a big fan of Wein, so I'll take any chance I can get to give her a shout out. After all, she colored nearly every issue of "Uncanny X-Men" from 1978 to 1992—pretty much the entirety of Chris Claremont's run. Yeah, she's a big time creator. But the Death Star's surreal neon colors didn't disappear completely. Nope, they just stowed away on the Millennium Falcon.

Okay, sure, green and purple Millennium Falcon. You know what? Colorists have to make these books fun for themselves. Nearly everything in "Star Wars" is a shade of white, black, or brown. I rescind all my complaints about the candy colored Death Star; you do you, colorists!

Leia gets annoyed at Han's space-mercenary priorities—he values his reward over the Rebellion—which leads to one of my most-quoted Luke Skywalker lines. 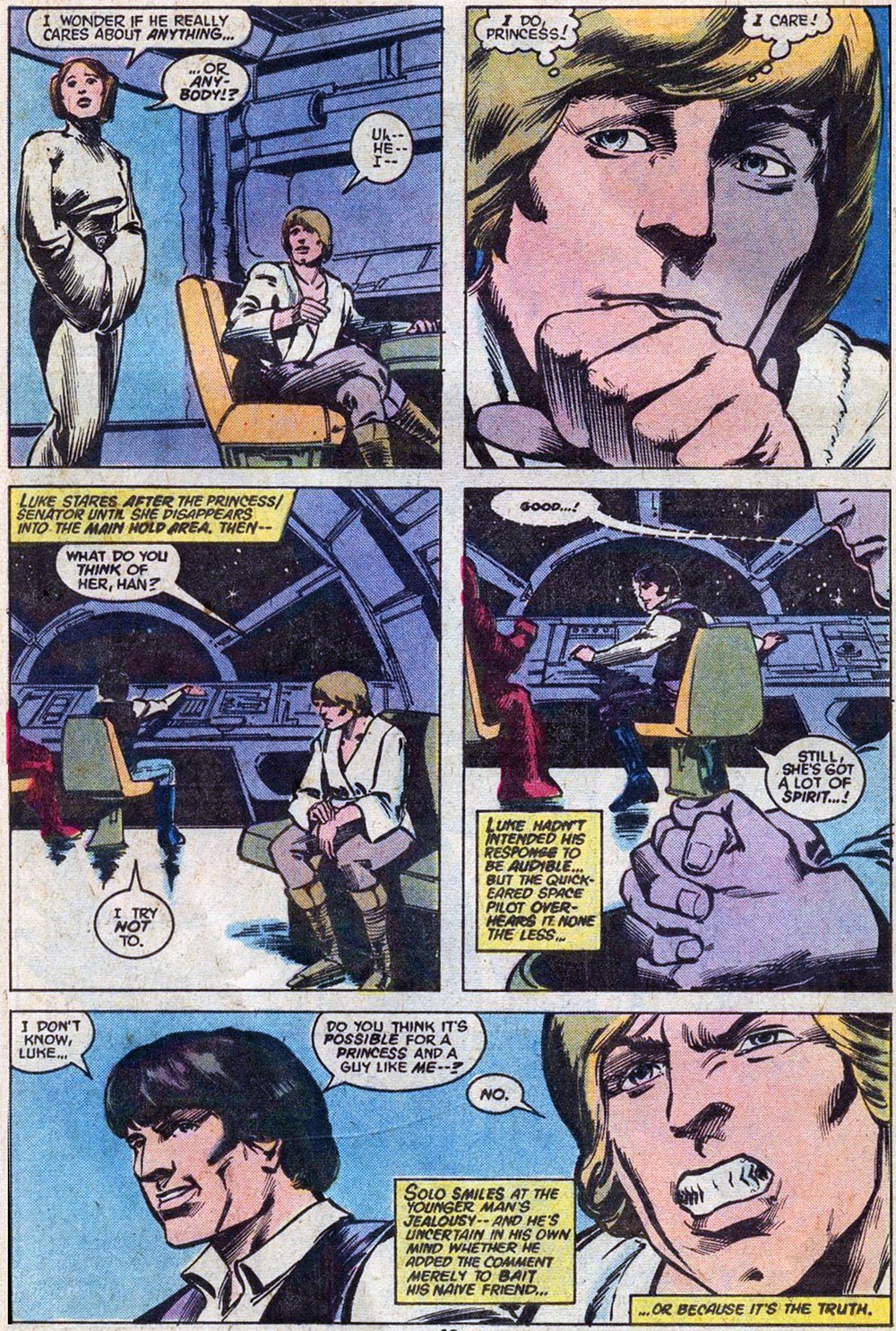 Luke thinks it instead of saying it, but still, it's there. The rest of the page, another example of Thomas and Chaykin letting a moment play out at its own page, depicts Han and Luke's brief flirtation with a love triangle over the princess—a princess that one of this is so incredibly super related to. Chaykin really oversells Luke's frustration in the last panel. His ill-defined, gritted teeth are some proto-Liefeld business if ever I saw it.

The Death Star escapees arrive at the Rebel base and the issue gives us an entire page explaining Yavin 4's history. I had no idea that Yavin is a huge gas giant, and that three of the planet's moons are inhabitable, or that the moon's "very air is heavy with the fantastic cries of unimaginable creatures." Seriously, Thomas basically rights enough text about Yavin 4 to fill a travel brochure. "Come visit Yavin—We Were Not Blown Up By The Death Star!"

With the Death Star plans extracted from Artoo, General Jan Dodonna briefs Blue Squadron—not Red—on the impending assault on the massive Imperial battle station. The scene includes all the memorable lines—"I used to bulls-eye womp-rats in my T-16 back home"—and concludes with General Dodonna encouraging his troops in an intense manner.

Yikes, no need to yell, Jan! That's maybe one of the most intense panels I've seen in all five issues. The balloon is sharp enough to cut through a blast door, Jan's index finger is breaking through the panel border, and "The Force" is nearly twice as big as all the other words. Dude's not wishing his soldiers be well, he's demanding it with all the intensity of a put upon dad. "The Force is going to be with you whether you LIKE IT or NOT!"

Luke gears up, gets brushed off by Han as the space-mercenary packs up his reward, and then has a run in with Leia. And…get ready for a case of the retroactive heebie jeebies. 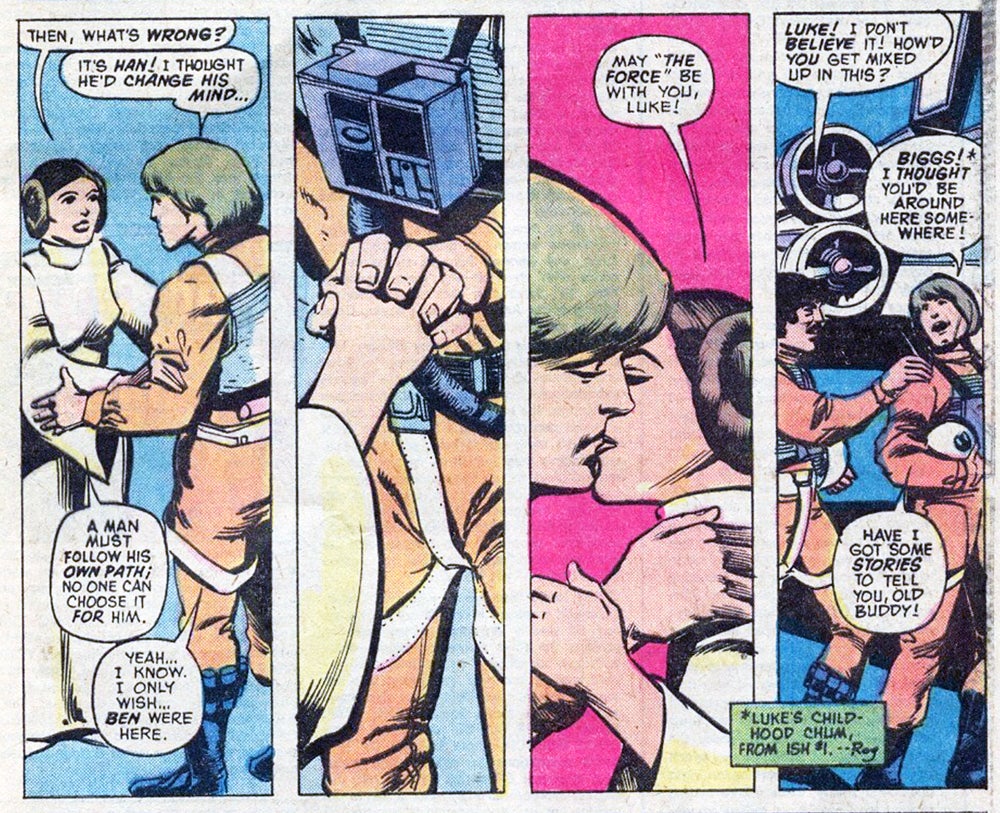 Yup, another kiss. Another sensual, eyes closed kiss between brother and sister! I know that no one—not even George Lucas—knew these two were brother and sister at the time. It doesn't make this any less uncomfortable to read. The way they lock hands and kiss, it's just too much. Thankfully Luke's old buddy Biggs Darklighter shows up and derails the proceedings before they get hot and heavy.

This scene between Biggs and Luke didn't make it into the final cut back in 1977, but it was added to the film in 1997 for the first Special Edition release. The scene doesn't accomplish much in the Special Edition, especially since Biggs' scenes on Tatooine weren't put back in as well. It works better in the comics, since readers already met Biggs back in the first issue. We get reminded that Luke has a buddy from back home fighting for the Rebellion.

The scene does differ from what was shot in one big way. Garven Dreis, "Blue Leader" in the comic, mentions that he knew Luke's dad when he was little. He's happy that Luke's on board for the battle because, and I quote, "The galaxy'll be a lot better off when the sons of the original Jedi Knights are back on the scene!" I can't read that line without getting the guitar lick from Thin Lizzy's "The Boys Are Back In Town" stuck in my head. "The sons of the original Jedi Knights"? That one line throwaway line knocks nearly everything about Star Wars lore out of whack. The Jedi are no longer an ancient organization if Anakin Skywalker was an original one. It also indirectly posits that the sons—curiously excluding the daughters—bear some mysteriously important Force-related purpose. What if Luke was tasked with rounding up the other sons of the original Jedi Knights? Cue a montage of Luke recruiting other farmers, burnouts, and scoundrels set to, of course, "The Boys Are Back In Town."

Dreis exits the conversation and Biggs and Luke say goodbye. Biggs then does something hilarious that instantly marks him for death.

"We're a couple of shooting stars that'll never be stopped!"

Biggs, you might as well have cut all the subtlety and said, "We're both definitely going to survive this—especially me, because I have to propose to my gal when I get back and start the next big chapter of my life!" Someone start a meme pairing this overly confident phrase with pics of the character's tragic death. Call it "Biggsing."

The issue ends with the "Blue boys" taking off in their X-Wings to battle the Death Star. In the vein of General Dodonna, Blue Leader feels the need to flat out yell words of encouragement at his men.

NEXT: "Is This—The Final Chapter?"