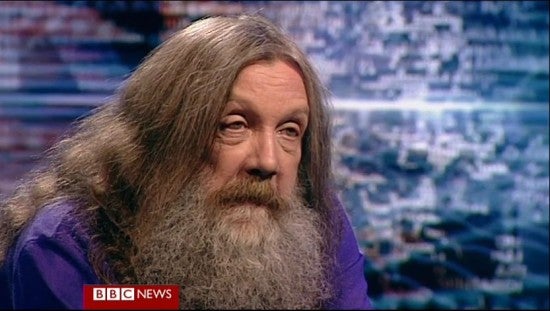 In a new interview with The Guardian, legendary comics writer Alan Moore took aim at the success of superhero films, particularly of Marvel's The Avengers, calling it "alarming" that adult moviegoers are paying in droves to see superhero films. "I haven't read any superhero comics since I finished with Watchmen," the writer said in a discussion on his latest work, Fashion Beast. "I hate superheroes. I think they're abominations. They don't mean what they used to mean. They were originally in the hands of writers who would actively expand the imagination of their nine-to-13-year-old audience. That was completely what they were meant to do and they were doing it excellently. These days, superhero comics think the audience is certainly not nine to 13, it's nothing to do with them. It's an audience largely of 30-, 40-, 50-, 60-year old men, usually men. Someone came up with the term graphic novel. These readers latched on to it; they were simply interested in a way that could validate their continued love of Green Lantern or Spider-Man without appearing in some way emotionally subnormal. This is a significant rump of the superhero-addicted, mainstream-addicted audience. I don't think the superhero stands for anything good. I think it's a rather alarming sign if we've got audiences of adults going to see the Avengers movie and delighting in concepts and characters meant to entertain the 12-year-old boys of the 1950s." [ed. note: The Avengers first appeared in September 1963, but this has little bearing on his overall sentiment.] While this isn't the first time he's claimed not to have read any superhero work in years, he's written a great deal of superhero fiction since then, most notably things like Tom Strong and Promethea--both of which were aimed squarely at an over-13 audience--at his America's Best Comics label under Wildstorm. He continues to this day working on League of Extraordinary Gentlemen, which takes the tropes of superhero team-up stories like The Avengers and applies them to literary heroes like Allan Quatermain and Tom Sawyer. The Guardian