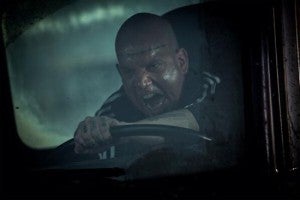 It's well-known among cinemaphiles that award-winning actor Paul Giamatti began lobbying to play The Rhino in Marc Webb's Amazing Spider-Man trilogy long before it was clear that the job actually existed. With the first official still image of Giamatti as Aleksei Sytsevich released earlier today (and our little back-and-forth with Conan O'Brien earlier this week), we figured it was as good a time as any to share the clip from TBS's Conan that seems to have been key to getting him the gig. (Besides that, when we went looking for the clip earlier, most news sites had linked to an unofficial YouTube version of the clip which has since been removed. Getting the "real" clip back into circulation seemed like it wasn't a bad idea.) Asked who he would like to play in the Spider-Man mythology, Giamatti told O'Brien that he hoped the filmmakers would bring back a villain from his childhood--The Rhino. O'Brien's website refers to the part as Giamatti's dream job. Do you think he can live up to his previous comic book role as Harvey Pekar in the critically-acclaimed American Splendor adaptation? Update: Taking things back one step further, it turns out that the source of the rumor that Conan O'Brien referred to in the clip was actually an interview that Paul Giamatti did with Collider, where Paul Giamatti was asked if there were any comic book villains that he would like to play. His answer seems to have started the wheels turning, which led to Conan's question and his eventual casting.

Amazing Spider-Man 2: How Giamatti Got His Rhino Horns