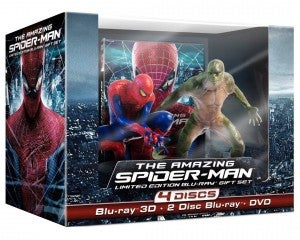 Check out the clip below, in which The Amazing Spider-Man director Marc Webb and producers talk about the challenges of re-establishing Spider-Man's identity, from the casting all the way down to how they filmed the character, in the new iteration of the classic Marvel superhero. Webb, who may or may not come back for the second and third films in the planned trilogy, was faced with the formidable challenge not only of making a good superhero movie, but of separating his films from the Sam Raimi films that came almost immediately before his and which were fan favorites. Star Andrew Garfield faced similar challenges, trying to follow the tough act of Tobey Maguire. The Amazing Spider-Man will be available on DVD and Blu-ray on November 9.

Amazing Spider-Man: A Preview of the Target Bonus Disc