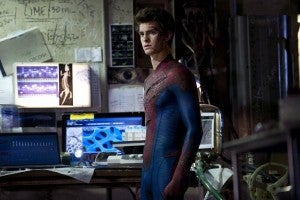 A while back, we discussed some of the interesting bits of trivia we gleaned from listening to Marc Webb's filmmaker commentary on The Amazing Spider-Man, the DVD and Blu-ray for which goes on sale tomorrow. In a story at Entertainment Tonight's website, though, various members of the film's crew have spoken out as well, suggesting that there are "Easter Eggs" in the Blu-ray release. Well, we've got a DVD, so if there's literally one of those aim-it-at-the-screen Easter Eggs on the Blu-ray, we might be out of luck--but we did notice a couple of odd things about the scenes that are mentioned by the filmmakers. "I'll give you a clue -- there's a scene where Gwen is in the Oscorp lab giving a tour to a series of students and there could be Easter Eggs in there," Senior Visual Effects Supervisor Jerome Chen told ET. "There's also an Easter Egg at the end of the movie…" We'll get to the end of the movie in just a minute, but the first thing that we noticed connects to one of our favorite theories about the movie's PS, in which a mysterious figure comes to visit Dr. Connors in prison.

In the comics, of course, there was a point when a man named Ezekiel came to Spider-Man and explained to him that he was a totem for spider-gods or something to that effect. It's been a while. At any rate, there were ancient and powerful forces at play, and it was these forces that not only connected Peter to the powers of the spider that bit him, but also had similar agents on the grounds, working for good and ill, that explain why so many of Peter's villains were basically just dudes who dressed like animals. The Lizard, the Rhino, the Vulture... ...wait, did we say "rhino"? There's a rhino in the Oscorp Tree of Life, the computer-generated display that also includes a spider and some birds and a wasp.  A fish shows up in the bottom left, as well, likely the zebra fish Peter was talking about in the movie moments before. The display, it seems implied, is the "menu" for the animals that Oscorp may be trying to cross-breed with humans to make incredible technological and genetic advances. So what's that rhino doing there? Also in the same interview, Additional Animation Supervisor David Schaub added that "In the very last shot of the film where [Spider-Man] is swinging, gets himself shot out of the crane and he's flying down past the George Washington Bridge and he strikes a pose, there's an Easter Egg -- but I can't tell you any more than that -- for something to come." Now, the very last shot of the film takes place about five second after you can see the bridge in question--the one where Gwen Stacy met her end in the comic book source material. So there are a couple of things.

And, oh yeah, this iteration of Spider-Man is pretty much always striking poses. There are two instances in those last five or so seconds of the film when Spider-Man actually seems to stop in midair as he strikes a pose and the movie itself slows down around him. The first of these, with the bridge in sight, is interesting because while there doesn't appear to be anything particularly spoilery in the shot (correct us if we're wrong), there does seem to be a brief blip of his spider-sense sound effect. Could it be that some odd, animal thing in the back of Spider-Man's brain is telling him, "That's a dangerous place to be"? 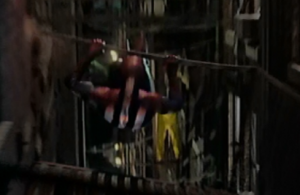 As he makes his way between this big pause and the second one, though, there's a shot that's pretty striking. Peter careens through alleys between buildings, passing a bunch of laundry hung between buildings. One particular item of clothing is impossible to miss: it's a bright--BRIGHT--yellow pair of pants. They appear to have a red stripe on the pantleg, although it's difficult to tell since there are old, rickety fire escapes and brick buildings all around. The whole scene is framed in a rust-colored grid of background noise. There have been a number of "electrifying" comments made of late, following the revelation that Jamie Foxx may be in talks to play Electro in the sequel. In the ET piece, Webb goes back to that well for another pun, saying "Peter, in the next movie, is going to be a virtuoso. Spider-Man, from the outset, is a pro. He's an expert, and he's having a blast, and he is just electrifying in terms of his abilities as Spider-Man. That's going to be really fun. I'm really looking forward to a lot of those sequences."

Leaving aside the question of whether he might be suggesting that there's some kind of odd electrical component that gets into Peter's power set in the next movie, we'll turn our eyes to the fact that Spider-Man has two major villains with electricity-based powers: Electro and the Shocker. And, to us, those pants look an awful lot like something Shocker would wear. And they're very bright, much more noticeable than any other single item on the clotheslines, for sure. Could that be an Easter Egg? The very last shot doesn't really appear to show anything, particularly. There's the vague possibility that the edge of a moonlit cloud is supposed to be a hint of electricity. The way the clouds wrap up the moon and cast a kind of steamy shadow rolling off it could plausibly be taken by some to depict Mysterio, the classic Spidey villain who recently terrorized the Spider-Men of two worlds in a Brian Michael Bendis-penned miniseries. His stage-magic-based power set suggest the kind of skills that could have allowed him the dramatic entrance and exit in Connors's prison cell, earning him a spot on our list of possibilities for the movie's PS as well.

And then of course there are birds flying across the moon. They're not vultures, but they do appear to be the same sort of birds that appear on the Tree of Life hologram (pigeons). Ultimately, none of that passes the sniff test. If there's a hint to be had in those final moments, it seems that either the spider sense at the bridge or the Shocker-tastic pants are the way to go. We'll see.