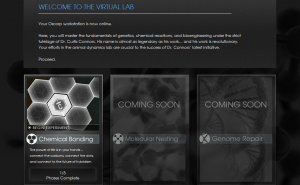 This morning, we speculated as to what exactly might be going on with the whole Oscorp internship program offered at the viral website for Sony's The Amazing Spider-Man. Now, we're beginning to see some of it evolve. Fans can now visit Oscorp's Animal Dynamics Lab, where a virtual laboratory simulation is live that will allow you to play a chemistry-themed game which, after eight levels, completes the first of three phases in your Oscorp training, with two more levels "coming soon." Presumably, while there is no specific guideline for it on the website, once a certain number of fans have unlocked the first step, it will allow the second and third to open. A Twitter account associated with the film only promises that the next round of experiments are "coming soon." 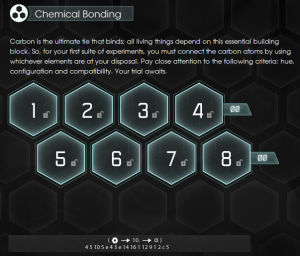 There's also a code that appears at the bottom of the screen for the Chemical Bonding test when you complete all eight levels--while I'm inexpert at such things, maybe a reader can chime in and let me know what it means. The image is visible at left, with the code at the very bottom of the screen in small print. There are both letters and characters included in the code. Twitter user Graeme Haugen, though, has translated the code, sending fans to a URL within the Oscorp website, and another group of fans (at the Unifiction boards) went amassed and aggregated links to a number of other folders, each of which include a little bit of bonus content on the website and some of which lead to other links with a small clue at the foot of the page. Type in https://www.oscorpindustries.com, followed by the following URLs for a number of special features: /skeweddistribution uncovers a brief, congratulatory video from Dr. Curt Connors. /covalence reveals a look at what appears to be some kind of DNA sequencing image, followed by a second image of--imagine this--a spider. /araneae is another video from Connors, this one a cryptic warning to be careful what you're looking for, as you just might find it. /foundations provides an up-close look at...well, something. I'm no scientist. But it's accompanied by what looks like another coding diagram. /externalvalidity is an intriguing look at a news story, apparently copied from a physical newspaper. None of the story is visible, but the photo accompanying it, which is of Dr. Richard Parker along with Curt Connors, right there. /dependentvariable is the last known URL, which shows a letter to Richard Parker from Mary,