Earlier today, ComicBook.com reported that X-Men: Days of Future Past director Bryan Singer had counted Ink among the new mutant character to be introduced in the movie. The character, created  by writer Marc Guggenheim and Swamp Thing artist Yanick Paquette during their time on Young X-Men,  has powers that manifest themselves after he's "inked" by a mutant tattoo artist, who gives Ink symbolic tattoos. A pair of wings allows him to fly, a Phoenix Force tattoo allows him to mimic the Phoenix's powers, etc. After having starred with the Young X-Men for a while, Ink was seemingly written out when he sustained life-threatening injuries and then stopped appearing regularly, but has appeared a few times since as a background hero in crowd scenes and the like. While Singer had not previously mentioned that the character would be introduced, astute readers figured out pretty quickly that somebody looking like him appeared in the background of an existing promotional photo for the movie. 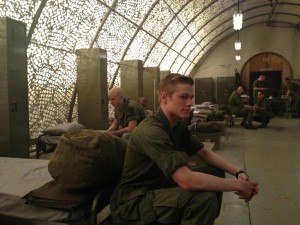 And since nobody seemed to have caught on back then, we showed our discovery off to Marc Guggenheim on Twitter. The writer, now doing a Punisher miniseries for Marvel Comics and writing/producing The CW's Arrow (which we quite like, if you hadn't heard), was pleased to hear about it. "If true/accurate, this is beyond awesome," Guggenheim told me via Twitter. "Ink is my favorite Marvel creation." He later added that someone had confirmed it for him, with the hashtag "excited." X-Men: Days of Future Past is due in theaters on May 23, 2014. Marc Guggenheim's next issue of The Trial of The Punisher is due in stores on Wednesday. Arrow airs Tuesday nights at 8 p.m. on The CW.

Arrow's Marc Guggenheim Excited To See Ink in X-Men:Days of Future Past