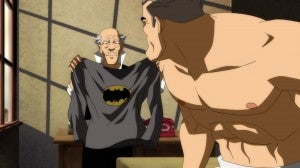 The latest clip from Batman: The Dark Knight Returns Part 1 hit the Web earlier today and it showcases Alfred Pennyworth, Bruce Wayne's lifelong friend and butler, and his unique brand of Frank Milleresque gallows humor. "I'm still the prime beneficiary in your will?" He confirms to the aging billionaire as he unfurls the Batman costume to send Bruce back out into the night following a call from Commissioner Gordon. Batman: The Dark Knight Returns Part 1 will be available on DVD, Blu-ray and video on demand services September 25. It stars RoboCop and Psych star Peter Weller as Batman and Radio Hall of Fame commentator/talk show host Michael Jackson, known to comics fans as Ganthet from Green Lantern: Emerald Knights, as Alfred.