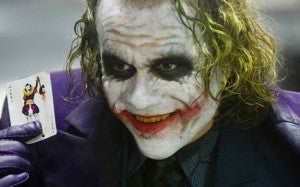 When Warner Bros. announced that the Man Of Steel follow-up would include Batman, it set off a ton of speculation over who would play the new Batman. But there's been relatively little written about who the villains will be in Batman Vs. Superman. The Man Of Steel movie included several Lex Luthor Easter Eggs, so many fans have naturally been assuming that Luthor will be the main villain in Batman Vs. Superman. But if the rumors are true about Warner Bros. seeking an older Batman, then everything seems to be pointing to the movie following a similar storyline to The Dark Knight Returns. With The Joker playing a major role in The Dark Knight Returns, it begs the question of if The Joker could wind up being the main villain in Batman Vs. Superman. Or could Lex Luthor and The Joker even team-up to provide a dual threat to Batman and Superman? Even though The Joker is Batman's most well-known nemesis, there's also a chance that Warner Bros. could avoid bringing him back right away to avoid controversy. Heath Ledger was the last actor to play The Joker, and his Oscar-winning performance will be tough for anyone to beat. There's also the matter of the tragic mass shooting at a movie theater in Aurora. The suspect in the case reportedly told arresting officers that he was The Joker. Because of both Heath Ledger's death and the Aurora shootings, it's possible that Warner Bros. might feel it's too soon to reintroduce the character at movie theaters. What do you think? Should Warner Bros. include The Joker in Batman Vs. Superman?

Batman Vs. Superman: Will The Joker Return?