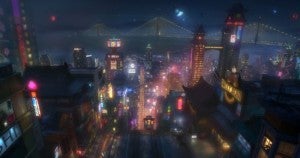 At D23 Expo, Disney has officially announced the roster for their upcoming animated feature Big Hero 6. Big Hero 6 will feature Baymax, Hiro, GoGo Tomago, Honey Lemon, Wasabi-No Ginger and Fred (known as Fredzilla in the comic books). Disney's Big Hero 6, an adaptation of the Marvel Comics miniseries of the same name. Big Hero 6 is not set in the Marvel Universe, but rather it takes place in San Fransokyo, which is a made-up combination of Tokyo and San Francisco. Big hero 6 is being directed by Don Hall with Kristina Reed producing. Big Hero 6 is scheduled to be released in the United States on November 7, 2014.