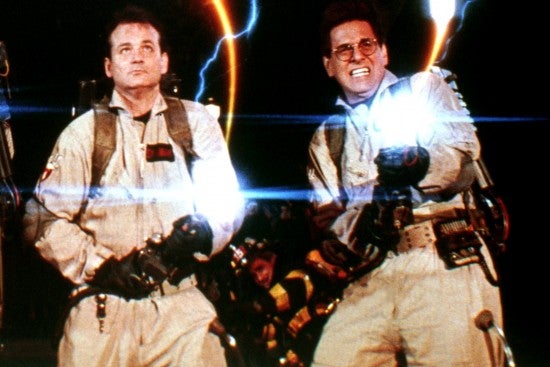 While presenting the Academy Award for Best Cinematography earlier tonight at the 86th Annual Academy Awards, comedy legend Bill Murray gave an impromptu shout-out to Harold Ramis, his longtime (sometimes estranged) friend and collaborator. Murray, presenting at the show less than a week after Ramis's death, read through the list of nominees and then added, "Oh, we forgot one. Harold Ramis for Caddyshack, Ghostbusters, and Groundhog Day." "Please forgive me, Gentlemen," he added after a few moments of applause, before reading off he winner (Emmanuel Lubezki for Gravity). Murray, who worked with Ramis on those films as well as in the Chicago and New York comedy scenes in the late '70s and '80s, had drawn some criticism for what some thought was a terse and detached comment following Ramis's death, noting that the filmmaker had "earned his keep in this world." In addition to the three big ones named above, Murray and Ramis worked together on Stripes and Meatballs. Ramis was never nominated for an Oscar, but the Groundhog Day script, which he co-wrote with Danny Rubin, won the BAFTA Award.