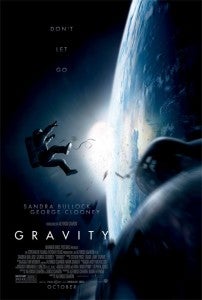 It seems that even the most optimistic projections for Gravity were not high enough. With most predicting an impressive $45 million to $50 million opening weekend for Gravity, the film is now said to be doing even better than originally projected. According to Deadline, Gravity is now on track for a $55.5 million opening weekend box office. The film did $17.5 million on Friday and $23.5 million on Saturday. In comparison, Cloudy With A Chance Of Meatballs 2, which should finish in second place, is projected to do $21.5 million. Also, Runner, Runner, which was this week's other big new movie opening, is crash-landing with only a $7.9 million opening weekend. Gravity was produced on an estimated $80 million to $120 million budget. Given the rave reviews from critics and the strong positive reaction from audiences, Gravity should have enough legs to stand tall at the box office for several weeks. If Gravity makes it into the Best Picture Oscar race as most are expecting, it could even enjoy a second run in theaters during Awards season. Gravity's $55.5 million opening weekend also set a new opening weekend record for the month of October, besting the old record of $52.5 million held by Paranormal Activity 3.