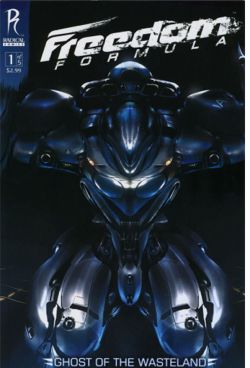 Director Bryan Singer is returning to the genre he knows best; the comic book movie. According to Screenrant.com, Singer and his production company Bad Hat Harry have inked a deal with Radical Pictures to develop a film based on the relatively unknown Indy comic series Freedom Formula. The deal also calls for 20th Century Fox to distribute the film. Fans of Singer's directorial works such as Superman Returns and the first two X-Men films shouldn't get too excited. Singer is signed on only as a producer and will not direct the Freedom Formula live action picture. Freedom Formula is an obscure comic book series, recently published by Radical Press. Only a handful of issues have been released thus far. A cross between Battletech and Rollerball, with a little bit of Top Gun thrown in, Freedom Formula is set in a future where corporations genetically breed humans to race in flying battle-suits called Vicious Cycles. The series revolves around a teenaged boy named Zee, who joins an illegal racing team called Freedom Formula, whose mission is to free humanity from the corporate overlords. Radical Press and its production company, Radical Pictures, also have plans to develop the Freedom Formula series into an anime series and a video game. Bryan Singer's deal with the Radical Press family is his second in this week. Earlier, Singer picked up an option with Warner Bros. to develop a film based on the comic series Capeshooters. Based on a forthcoming Rob Liefeld graphic novel, Capeshooters follows a pair of down-on-their-luck film makers who try to make a living shooting footage of superheroes in action. J.P. Lavin and Chad Damiani are tapped to write the adapted screenplay.

Bryan Singer Signs On To Pair Of Comic Book Movies