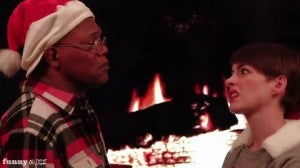 Quick: Which movie was better, The Avengers or The Dark Knight Rises? While fans have been fighting about that all summer long, a couple of actors who starred in those films have something more important on their minds: which of their Christmas releases is more depressing? That's right, folks--Samuel L. Jackson (of Django Unchained) and Anne Hathaway (of Les Miserables) are coming together to with you all a happy holiday and to argue with each other about which of the films is less life-affirming and more misery-inducing. Merry Christmas! It's actually a great sketch from Funny Or Die, the same folks who have brought us things like Don Cheadle dressed as Captain Planet. You can check out the embed below. If they come to blows, my money's on Hathaway. She looks scrappy.

0commentsThe Sad Off with Samuel L. Jackson and Anne Hathaway

Catwoman vs. Nick Fury in a "Sad Off" This Christmas