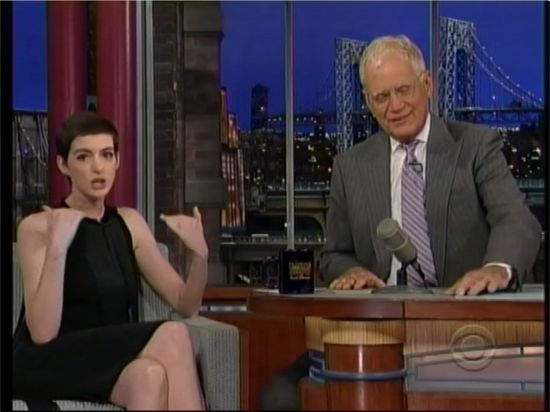 David Letterman is the latest talk show host to weigh in on The Dark Knight Rises. On Thursday night's episode of The Late Show, Anne Hathaway appeared to talk about her role as Catwoman in The Dark Knight Rises. Letterman revealed that he had already seen the movie. Here's what David Letterman thought about The Dark Knight Rises. Letterman said, "What a deal this thing is. Well, you know what, I'll tell you in all honesty. I went to the movie, and it's two hours and forty-five minutes. So two hours and forty-five minutes, that says bring survival gear, and I went in there, and the thing flies by. I was amazed at how quickly it goes by, and that's the sign of a great movie." Looking at Hathaway, Letterman also added, "You were fantastic. The cat-suit was fantastic, and I loved it. I loved it!" What did Letterman think about The Dark Knight Rises in comparison to The Amazing Spider-Man? Letterman said, "Well, earlier in the summer I saw the Spider-Man movie, and I liked that also. But in the Spider-Man movie, halfway through there's a giant lizard." Letterman continued, "But there's a giant lizard, they're chasing in Spider-Man, and it's in 3D. But you see, in my mind, I know there aren't giant lizards. So when the giant lizard arrives, I'm less interested in the movie. In the Batman movie, it's just sinister people. I know they exist. So you got that going for you as well." Near the end of his conversation with Hathaway, Letterman teased a possible spoiler. Letterman was probably joking, but just in case, we're including a spoiler warning. Letterman said, "This is a huge movie, and what I liked about it, people said, 'well I haven't seen the first three or four…'  I said, 'It's not necessary. It's not essential to see all previous installations of Batman, and I think this is it, and in the end Batman is Dead." Letterman then laughed and said, "He's not dead. He ain't dead, just relax, will you."

David Letterman Reviews The Dark Knight Rises: "I Loved It"