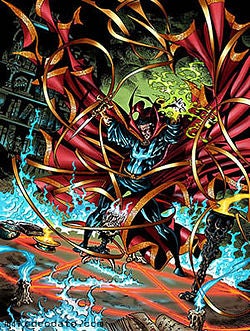 There's a crazy new rumor gaining steam online that Doctor Strange will actually be introduced in Thor: The Dark World. The source of the rumor appears to be a twitter account which has been posting a number of spoilers about upcoming Marvel Studios movies. While there are a lot of twitter accounts out there that post Marvel Studios spoilers, this particular twitter account has the distinction of announcing that the Falcon would be in Captain America: The Winter Soldier before anyone else. While much of the scoop posted by this twitter account has not been proven or unproven, we can also add that some of the Iron Man 3 details posted match up with things we have also heard from sources close to production. Even though this should definitely be classified as rumor given the source is a tweet, Doctor Strange showing up in Thor: The Dark World would sort of make sense. Doctor Strange is one of a handful of characters that Marvel Studios President of Production Kevin Feige has specifically mentioned adapting to the big screen. Even Stan Lee recently mentioned that Marvel was considering their options with a Dr. Strange movie. If you look at all the upcoming Marvel Studios movies, Thor: The Dark World is really the only one that would fit with introducing Doctor Strange. Screenrant has also pointed out that The Playlist also mentioned a rumor awhile back that Dr. Stephen Strange would be a part of the Thor sequel. In fact, Screenrant also connects the dots between another post made by the same twitter account, which says, "Marvel is negotiations with Viggo Mortensen for an unspecified role in one of their Phase 2 films." Vigo Mortensen would certainly make for a compelling choice to play Doctor Strange.