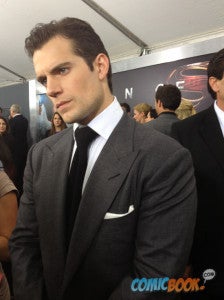 Last night, the cast and crew of Man of Steel took New York by storm for a black-carpet premiere (red wasn't practical, we suppose, given how wet it was in the city yesterday). ComicBook.com was there, and we've been bringing you interviews throughout the day--but we saved the biggest one for last. Henry Cavill spent a good deal of time with reporters last night and while hardly anybody got a one-on-one with him, ComicBook.com was there for two of his sessions, giving us a unique and expansive conversation with the newest incarnation of the Man of Tomorrow. What do you think is the thing that fundamentally drives Superman in iteration? There's no one essential one. It's "Who am I?", "Where am I from, and what am I doing here?" and "Why am I?" And then there's the question of "Are these my people or are they not my people?" And that must be a very, very hard decision to make when it comes down to the crunch. 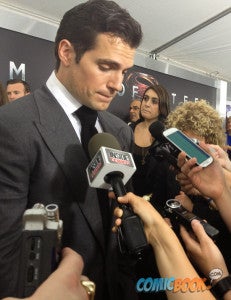 Why do you think all of these English actors are getting roles as iconic American superheroes? I mean, we've got Bale, and Andrew Garfield and now yourself. Are there just not American actors who can swing this kind of performance?

There's nothing wrong with American male actors. The case is that we, as three actors, just happened to fit into the respective directors' visions at the time. What was the story with Amy [Adams]'s little daughter grabbing your ass in your outfit? Um, yeah. Amy's little daughter, I think she just...I happened to be turned away from her, and because I was turned away--she was always quite shy when I tried to talk to her--she then saw the opportunity to actually look at my outfit. And she wanted to touch it. And so she reached out and she just happened to be at bottom height and it was just then that Amy caught her hand and said, "No, you can't do that!" So that's the story. 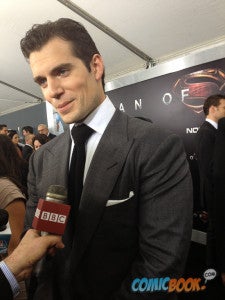 What do you think about the costume? I actually love the new look. It's definitely an evolution of the suit and I love the way that it's from Krypton; it's like an alien body glove and alien technology. Was it uncomfortable? Yes, it was uncomfortable at times but it's such a special suit and it gives off such a special, incredible aura that that totally outweighed any discomfort I was going through. Were there any problems filming in it? Well, it's quite a tight suit, obviously, and so that can be quite restrictive. And also, going to the lavatory wasn't the easiest thing so it would take some time to get in and out and I'd have to wait. In Chicago, I could drink as much water as I wanted to because I'd just sweat and it would be fine--but when it came to Vancouver where it was cold, I couldn't sweat. I didn't sweat; it was freezing cold. So I drank one water bottle every half-day, and when you're training for an hour in the morning as well, that can get a bit brutal. What does it mean to you to play Superman? And you're the first British actor, too. Oh, a short question then! [Pause] It means an awful lot to me, because it's such a wonderful opportunity. It's an incredible character and all the filmmakers, producers, the studio, the actors, the writer, everyone involved is best in class and I've worked thirteen years to get where I am now. Thirteen years with lots of no's--and lots of actors get a lot of no's, but it's still nice to be here. To be the first British actor to play the role--that doesn't matter a lot to me. Okay, to be the first of anything is always fun and it's an honor but I don't think it means anything more than that. Do you see a difference already in terms of people coming up to you, recognizing you as Superman? Yes, people really have. It's happening more and more now and it's something I'm not quite used to  yet, but hopefully I'll get there. Did you ever do research in terms of Christopher Reeve's take on the character? How would you compare the two? I do not compare the two of us at all. I did not go to any of Christopher Reeve's work when I was looking at source material--that's his interpretation of the character and it was wonderful and amazing for the time. This is our interpretation. It's entirely different and we approached it like nothing else existed in live action before apart from the source material. What super power would you want if you could have one? Flight. Easy one. No waiting in lines at the airport, no taking my shoes and belt off. How did you get in shape for the film? That was a very, very long and complicated process. Five months of training before the movie and then we did six months of traiing throughout the movie. Wake up every morning, do an hour of work in the morning and then a fourteen-hour day after that. It went from like a foundation level to a very technical level to a high-calorie mass-building level to leaning down for the suit.

Everything Leaving Hulu in June 2022