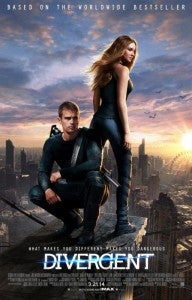 The first full-length trailer for Shailene Woodley and Miles Teller's young adult adaptation Divergent has been released online. You can check it out below. Clocking in at two and a half minutes, the trailer plays up the special and unique nature of Woodley's character, effectively downplaying the dystopian, child-combat-related similarities to The Hunger Games and making it seem like more of a superheroic or messianic story. Teller is reportedly in talks to play Reed Richards in the forthcoming 20th Century Fox reboot of Fantastic Four, while Woodley was signed to play Mary Jane Watson in The Amazing Spider-Man 2, but dropped from the film when the "trilogy" expanded to four movies. Whether she will be the one to play MJ in future installments of the Amazing franchise is still up in the air; early reports suggested that she was to be replaced, but the filmmakers said that virtually everything out there about the situation up to that point was baseless speculation and/or wrong. While the role was expected to be small in the second film, Mary Jane is widely expected to figure more and more into future installments and if Divergent is a hit, scheduling may become an issue for the movies. According to studio Summit Entertainment, Divergent is a thrilling action-adventure film set in a future where people are divided into distinct factions based on their personalities. Tris Prior (Woodley) is warned she is Divergent and will never fit into any one group. When she discovers a conspiracy to destroy all Divergents, she must find out what makes being Divergent so dangerous before it's too late. Based on the best-selling book series by Veronica Roth. The film will be in theaters March 21, 2014.