With the release today of the film's official trailer, (most) fans have their first real look at the world of Gareth Edwards's Toho redo Godzilla--and so far, so good (although there isn't a ton to go on just yet, admittedly). There was a lot to be seen in that two-and-a-half minutes, since the whole second half was basically quick cuts to get every actor on screen. But what were the moments that left us with the strongest impressions? Read on... 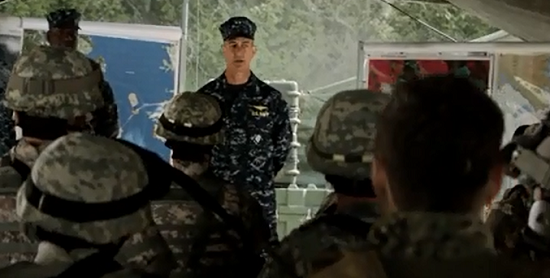 With Breaking Bad fresh in everyone's memories, a lot of people got very excited when it was revealed that Bryan Cranston would be appearing in the film. Why? Because at this moment, he's widely regarded as one of the best working actors in Hollywood. The same can be said for Elizabeth Olsen, whose Martha Marcy May Marlene made her a critical darling before she started signing on the dotted line for just about every massive blockbuster that came along (Godzilla, Avengers: Age of Ultron and she's been rumored for more, including Star Wars Episode VII). A bit less so for Aaron Taylor-Johnson, but his mix of fun, culty hits like Kick-Ass with big-budget bonanzas like Avengers 2, it's impossible to pretend he's not a star on the rise. So why are we so excited to see David Strathairn? Well, leaving aside the fact that he's the guy from Return of the Secaucus Seven, Matewan, Eight Men Out and City of Hope--four movies that you should not live your life without watching--and his potent crop of genre fare like the Bourne series, The Spiderwick Chronicles and the underrated Alphas in recent years, you've got the fact that hiring on an actor of his caliber in what seems to be a fairly minor role gives this film the same kind of gravitas that Man of Steel had bringing in Russell Crowe as Jor-El (which, admittedly, turned out to be less minor than we all thought) or Laurence Fishburne as Perry White. It means they're taking the source material seriously, which is a good sign in the opening seconds of the trailer.

The reveal of the city in flames

As the soldiers prepare to drop into what viewers know is going to be monster-infested territory, it's unclear where they are. Fog, smoke and clouds coalesce into an impenetrable mass that kind of leads viewers to believe this might be happening in the middle of nowhere, perhaps near a volcano, or by the ocean, or... Oh, crap. nope. That's a city in ruins. It's a great, quiet reveal and it works, most likely, only for the trailer since one assumes that by this point in the film, people watching the movie will have an idea of where the jumpers are going. So even if it's still a cool, gradual reveal on the big screen, this particular "wow' moment seems designed primarily for those of us watching the trailer.

Oh, no! There goes Tokyo!

From posters and toys to the Comic Con footage, Legendary has been very good about teasing the look of the monster without giving away the entire game. And while many fans hoped for a good, long look at the King of Monsters, Godzilla once again gets only a kind of fleeting glance here, through fog and fire and lightning; you definitely get a sense for him, but it's the same sense that our heroes, skydiving into a disaster zone, might get and not much more. It's a cool strategy that makes a lot of sense because it doesn't only pay off for them if the monster looks awesome. I mean, yeah, if the monster looks fantastic and that final reveal is really exciting, that's good for the movie. But also, if it doesn't impress fans quite the way they hope it will, keeping it under wraps and preventing unfavorable comparisons to the last American version of the creature in the notoriously-unpopular 1997 version certainly can't hurt you.

One of the most iconic images of Godzilla's many rampages through Tokyo over the years was his attack on mass transit--specifically the attack on the train in Godzilla: King of Monsters. Seeing hints of that throughout this trailer suggested that, a bit like the famed "death of Spock" scene that was remade in Star Trek Into Darkness, that iconic Godzilla moment might be returning to the screen with a twist in the reboot. And, yeah, we hope it's done better than it was in Star Trek, too. But it seems like it will be, which is why we're excited.