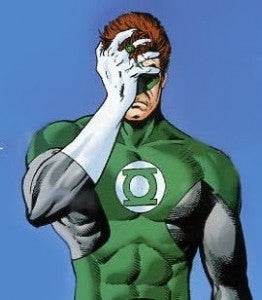 Well, that didn't take very long. News of an ambitious first draft for Green Lantern 2, which would feature Warworld, the Sinestro Corps and reunite much of the cast from the first film have hardly begun to circulate from a Cosmic Booknews report we just covered, and already we've been in contact with one of the writers of the supposed draft, who says the report is totally without merit. "Absolute bulls--t," writer Marc Guggenheim, who is cited in the report as being one of the writers of the draft in question, wrote us back in an e-mail when linked to the story in question. Guggenheim offered no other comment on the matter, so the larger question--whether there is a draft, either already submitted to Warner Brothers or at least in the works, for Green Lantern 2--will have to remain a question mark for now. In any case, the one described in great detail in our last report is apparently not real.