No, Peter Quill is not a sex criminal in any way that American audiences would understand the phrase. It may seem odd that the director of a Marvel Studios superhero film would have to clarify this point but, as we noted yesterday, one of the charges on Star-Lord's rap sheet is "Illegal Manipulation of a Gramosian Duchess," for which he's branded a sex offender. Apparently this designation has worried some viewers, and so Guardians of the Galaxy director James Gunn, introducing a brief featurette on the character on Facebook, took the opportunity to clear the air: 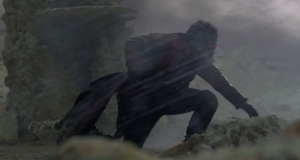 "I'm getting a lot of questions about Peter Quill's 'sex crime' as listed on his rap sheet in the trailer - 'illegal manipulation of a Gramosian Duchess,'" wrote Gunn, whose first days after being named director of the film were marred by controversy when he blogged about the sexiest and least-sexy comic book characters and offended...well, just about everybody. "Just to explain, Quill was seduced by the Duchess and, as anyone who has been to Gramos knows, it's illegal for regular folk to be intimate with royalty there. So there you go." In other words, he had a tryst with somebody whose father was royalty, on a planet where royalty get to decide whether that kind of thing is legally allowed or not. So...less like anything we might call a sex crime and more like when Bill and Ted were caught talking with the Princesses and the Royal Ugly Dude ordered them to be executed. The inhabitants of the planet Gramos are actually best known for a storyline in which they came to earth seeking the power of Thor's hammer Mjolnir. At another point, Gramosian leader Mercurio also sought out Xorr, the God-Jewel, which paints a very particular picture of his kind of activity…and it seems he may in fact fit in well in this movie.