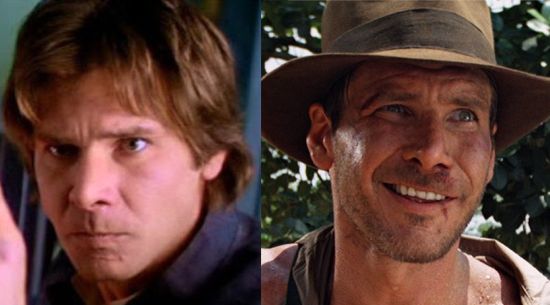 While rumors are circulating that Star Wars Episode 7 news is imminent, Harrison Ford is still playing it as coy as ever. Harrison Ford and Benedict Cumberbatch both recently taped an appearance on The Graham Norton show. Even though the show isn't set to air until Friday, some highlights from Ford's conversation with Norton are already slipping out. Of course, every talk show host is required to ask Harrison Ford about Star Wars Episode 7. When faced with the question on The Graham Norton show, Ford replied, "I've not quite made the choice." Assuming Ford is shooting straight about not having decided yet, it could explain a lot. If Hamill and Fisher are already signed on, but Ford is holding out, then it makes sense why Disney has not made any official announcements about the original cast. Even through Ford is reportedly undecided about Star Wars Episode 7, he appears to be much more clear on another popular franchise. When asked if he would appear in a new Indiana Jones movie, Ford said, "In a New York minute, yes. I don't think there is any barrier to Indiana Jones being an old fart." While the rights situation with Indiana Jones are a little more complicated with Paramount owning the distribution rights, it's obvious what Disney and Lucasfilm need to do here. They need to find a way to promise Ford an opportunity to do Indiana Jones again in exchange for him agreeing to do Star Wars Episode 7, then everybody would be happy.