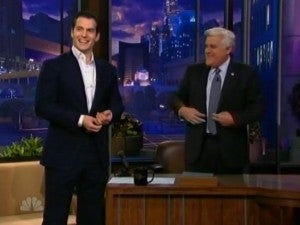 On Thursday night's Tonight Show, Man Of Steel star Henry Cavill was a guest. After comparing himself and Cavill to a before and after weight loss photo, Jay Leno asked Cavill what other major roles he came close to landing before Man Of Steel. Cavill said he came close to landing Twilight, Bond, and a previous Superman movie. When asked what he was doing when he got the call to be Superman, Henry Cavill said, "I'm a big PC gamer, and I was playing an online game called World of Warcraft." Cavill continued, "I was playing this game, and you can't save it. You can't pause or anything, and other people are relying on you to play certain roles on a team. And it was a highpoint of the game. And so the phone's ringing, and I'm ignoring it and ignoring it, because I'm not going to bail on these guys. And I look down and it's Zack Snyder calling, so I dive for the phone, and I missed the call from Zack Snyder, the one I'd been waiting for, for Man Of Steel." Cavill added, "I tried calling back, no answer. I'm thinking great, I've lost the job or never going to get the job, never going to know now. So then, Zack calls back, and he sounds like he's going to let me down easy, but then eventually he says, 'Hey, I was wondering if you want to do this little movie with me.'" When asked about getting into his Superman suit, Henry Cavill said, "It wasn't simple. It took me and two other guys about 15 minutes each morning to shoehorn me into the suit." When asked about the oil rig fire scene shown in the Man Of Steel trailers, Henry Cavill talked about a deleted scene from Man Of Steel, where he had a close call. Cavill revealed that it was real fire in the background, and they covered him in fire gel to keep him safe. Cavill said, "There's this one bit that didn't make the movie unfortunately, but I walked up toward these stairs looking for these guys working on the rig. And they set off this fifteen to twenty foot fireball in front of me. And I'm about twenty-five meters away from this thing, and the fire gel on me dries and cracks instantly. And had I not been wearing it, my skin would have blistered and come clean off."