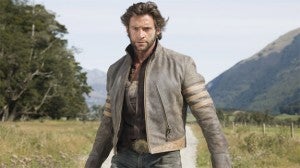 Chappie, the upcoming feature film based on Elysium director Neil Blomkamp's short film Tetra Vaal, has added X-Men star Hugh Jackman to its cast, Screen Daily reports (via CBM). Jackman announced the news himself while on a press junket stop for his new film Prisoners at the Zurich Film Festival. "I am doing a role in Neill's new film, called Chappie, which we shoot in Johannesburg," the X-Men: Days Of Future Past actor revealed. "I'm there for a couple of weeks at the beginning of next year." The movie will also star Sharlto Copley, who'll play the title role of a robot via motion capture. The Newsroom's Dev Patel will also star. In the story, Chappie is a law enforcement robot who is stolen and reprogrammed by a couple of gangsters. Jackman is reportedly expected to play a CEO who finds himself at odds with the gangsters and has to figure a way out of the situation. You can see Tetra Vaal test footage below. Jackman's last onscreen outing with robots--Real Steel--may have left a bad taste in many of our mouths, but fans are hoping that X-Men: Days of Future Past, which will be released long before Chappie, does a bit better when Jackman's Wolverine faces off against Sentinels.