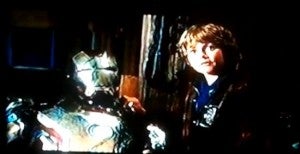 The Disney Channel is airing an Iron Man 3 featurette which includes some brand new footage. The featurette stars Disney Channel's Shake It Up star Roshon Fegan on the set of Iron Man 3. Most of the new footage in the featurette revolved around when Iron Man 3 crash lands in the small town of Rose Hill, Tennessee. That is when Tony Stark meets up with a kid named Harley. In one new scene, Harley looks at a beat up suit of Iron Man armor and asks Tony Stark, "Is that Iron Man?" Tony Stark says, "Technically, I am." Harley exclaims, "That's way cooler." Iron Man 3 is set to be released in theaters in the United States on May 3, 2013.

Iron Man 3 Behind The Scenes Featurette With New Footage