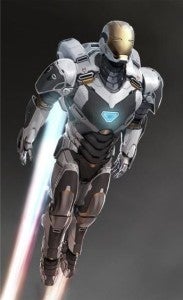 Iron Man 3: Mid Credits Scene Could Be In Limbo Because Of Downey Jr. Contract