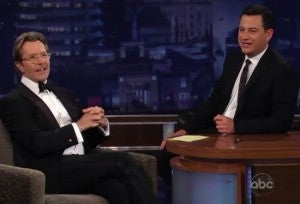 On last night's Jimmy Kimmel Live, Gary Oldman, who plays Commissioner Gordon, appeared to talk about The Dark Knight Rises. After Oldman walked out in a tuxedo, Kimmel revealed that thanks to Oldman he got a private screening of The Dark Knight Rises last night. What did Kimmel think of the movie? Here's Kimmel's brief but to the point review. Kimmel said, "It was pretty much the highlight of my year, I have to admit. I was so excited. It came out great." Even though The Dark Knight Rises was the highlight of his year, Kimmel was restricted from going into more details. Kimmel revealed, "They told me though I can't talk about it. I assume I can talk about it on the show, but I can't tweet about it. I'm not allowed to dream about it." Kimmel's comments then led Gary Oldman to talk about the secrecy around The Dark Knight Rises script. Oldman revealed that Christopher Nolan gave out scripts without an ending, because he didn't want the ending to get out. Oldman also relayed the story of the time he hid his script in his hotel room and forgot where he put it, which sent him into a twenty minute panic. When Kimmel suggested he should have blamed Michale Caine, Oldman said that each script has a serial number and each person's name is watermarked on it. Oldman also said that the script pages were in red so they couldn't be photocopied. Of course the story had a happy ending as Oldman finally found his script where he had hidden it between the mattresses. In regards to Anne Hathaway, Oldman said, "Not to give anything away, Anne Hathaway, she is a revelation in this film. Well, you've seen it. Boy, she can time a line, huh?" Kimmel replied, "I was a little suspect. Anne Hathaway seems to kind of sweet to be Catwoman, but she did do a very good job." In regards to the possibility of Christopher Nolan making another Batman movie, Oldman said, "I think it is the last one with Chris Nolan, and if he comes back and makes a fourth in 3D I'm going to look very stupid." Jimmy Kimmel Live also offered up the first clip from The Dark Knight Rises, which featured Commissioner Gordon and John Blake.

Jimmy Kimmel Reviews The Dark Knight Rises: "The Highlight Of My Year"