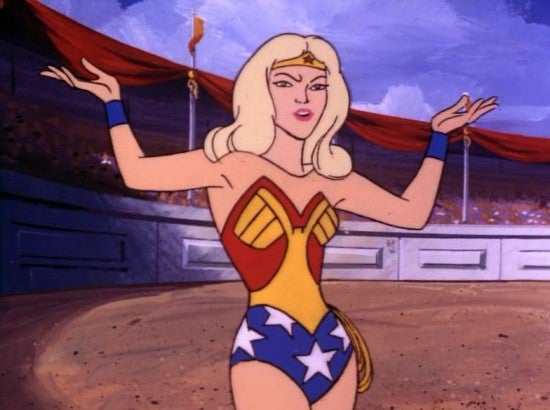 In spite of the fact that director Giancarlo Volpe is not a huge fan of the '70s Super Friends series, he told Voices From Krypton that his new direct-to-DVD movie, the Target-exclusive JLA Adventures: Trapped in Time, is an updated retelling of a specific episode of the show. The episode: "Secret Origins of the Super Friends," in which Lex Luthor sends the Legion of Doom back through time to prevent Superman, Green Lantern and Wonder Woman from becoming heroes. In the case of JLA Adventures, it's just Superman--but he's a lynchpin that holds the superhero community together and without him, the future  would be dramatically altered. Enter his childhood friends Karate Kid and Dawnstar from the Legion of Super-Heroes, and suddenly you've got a ballgame. "Mike Ryan, the writer, and I actually had begun to develop a Justice League project, but it didn't work out," Volpe explained. "When this came around, it was confusing because I wanted to tell the story that we originally wanted to tell, but we knew that that story would require 13 episodes and the order for this was, I think, originally 44 minutes. As a result we were just trying to come up with something simple that we could fit in the 44-minute timeframe. The other impetus for this was also essentially modernizing the Super Friends TV show. Mike, who was a huge fan of the '70s Super Friends, said that one of his favorite episodes had Lex Luthor sending the Legion of Doom to the past to futz with the origins of Superman, Wonder Woman and Green Lantern. He was, like, 'I'd love to retell that story.'" In the Super Friends episode, the absence of both Wonder Woman and Green Lantern has little visible impact on the world until Superman's origin, too, is upset--so maybe their approach isn't entirely different from the one from the '70s. Volpe added, "There was an initial concept piece that was drawn for this project before I was even a part of it. Two of the characters were Karate Kid and Dawnstar. If you know those characters, they're actually not from our era. They're Legion of Super-Heroes characters, which are 1,000 years in the future. So instantly we thought, 'We need some sort of reason they'd come to our timeline.' I didn't want that to be some sort of convenient rip in the sky and they fall out of it and suddenly we go on some other adventure. I wanted the whole thing to be about time travel. So when Mike heard that, he told me about that Super Friends episode, so we borrowed from that a lot. Originally we were also going to have Lex futz with multiple characters, but in the interest in keeping within the allotted time, we had to focus just on Superman. In our continuity, Superman was the first hero ever. If he never formed, there would be no Batman and there would be no Wonder Woman and so on. Lex kind of knows this and if he can get rid of Superman, there would never be a Justice League." Since the impetus for this movie was related to the Target Justice League toy line, one has to wonder: will we be getting Karate Kid, Dawnstar and Robin action figures soon? They aren't included in the existing line, and some figures Target have already released--such as Green Lantern--are absent in the film.

JLA: Trapped in Time is a Retelling Of An Old Super Friends Episode