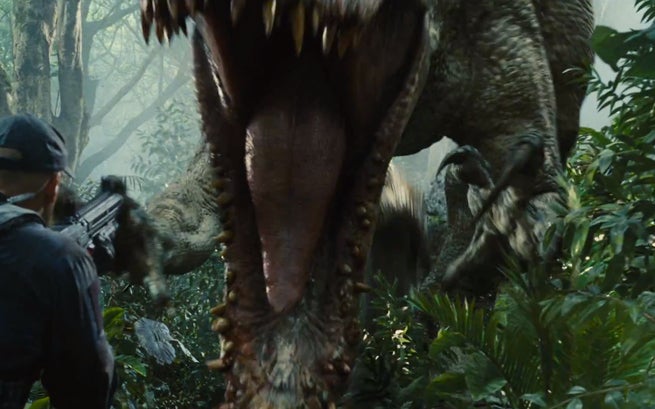 Tonight's Super Bowl trailer for Jurassic World spent a good bit of time with the Indominus Rex (seen above), a new dinosaur created for the film and genetically engineered to be a dangerous and frightening predator.

But...what other creatures have we seen so far?

Quite a few, as it turns out.

First of all, in both ads we've got what seems to be a Hainosaurus -- the largest variety of a water-based family of lizards called Mosasaurs who were dominant during the Late Cretaceous period.

They're also not dinosaurs, but who are we to be picky? The thing looks cool and it ate a shark.

Now...back to the first trailer. And let's get this out of the way: I'm not at all an expert with this, so take this for my uninformed opinion, mixed with commentary I can find online. Also, because I don't know a ton about dinosaurs, I'm going with descriptions from the Parkpedia and Walking With Wikis. 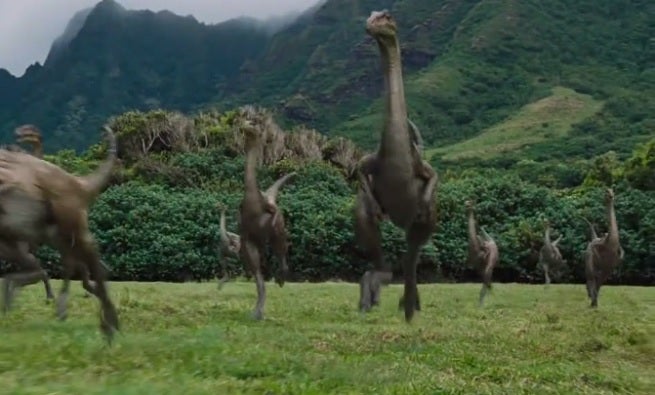 Utahraptor was a dromeosaurid dinosaur of the theropod family, though at 5–8 meters in length, 2–3 meters in height, and 1000 kilograms in weight, it is the biggest member of its family found so far, much bigger than its later kin, such as the more famous Velociraptor.

Here, we see a few stegasauruses and apatosauruses. I'm also thinking that the injured animal toward the end of the second trailer is just an up-close shot of an apatosaurus head, so I'm including here.

Easily one of the best known of all the dinosaurs ever, Stegosaurus is recognized all the world over. It is the biggest and most famous member of the stegosaur family. It roamed the open plains of the Late Jurassic Period in what is now North America. The plates along its back, its small head and spiked tail make it a peculiar and unique dinosaur. This plant-eater evolved to find its food in the low-growing plants of the late Jurassic. The long fearsome spikes on its tail would have made a powerful weapon against any hungry predators.

Apatosaurus (name meaning "deceptive lizard," previously known as Brontosaurus, which means "thunder lizard") is a genus of sauropod dinosaur which lived during the late Jurassic period in the United States of America.

And of course the end of that first trailer was chock full o' velociraptor.

Velociraptor is the 3 to 4 meter (10–13 foot) long, 2 meter (6 foot) high dromaeosaurid theropod carnivore that appears in all Jurassic Park films and film-based media. The Raptors are the main antagonists of the first film and are the secondary antagonists of the second and third films. It appears as though at least some of them have been domesticated in Jurassic World, although whether as performers or an insurance policy against other rogue dinosaurs isn't clear.

After the dinos we'd already seen in the previous trailer, the first entirely new shot in the Super Bowl trailer is the one directly above, which provides us a good look at stegosauruses, an apatosaurus or three and two triceratopses.

You can check the former out above, and the latter below. (And, yeah, minor spoiler warnings for the red shirt who dies.)

There's a flock of Pterodactylus in the park, some carrying away tourists. 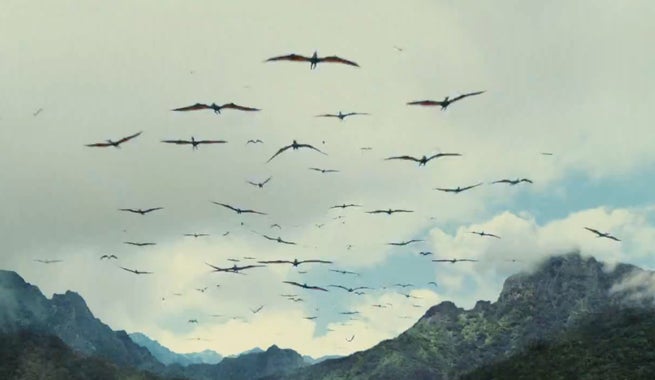 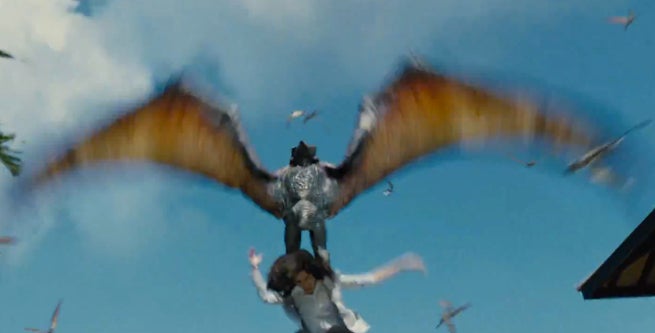 Pterodactylus was a Pterosaur that lived in the Late Jurassic of Bavaria, southern Germany. It was the first Pterosaur to be scientifically described by the Italian naturalist Cosimo Alessandro Collini in 1784. It was named "Ptero-dactyle" by French anatomist George Cuvier in 1809, but not formally described until 1812. It was first thought to be sea creature of some sort, but was later shown to be a flying reptile.