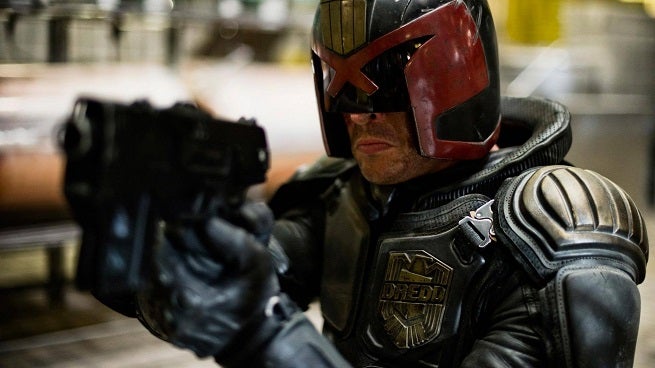 Update Sept. 7, 7:30 p.m. EST - This story originally indicated that the film would likely be a prequel rather than a sequel, which is inaccurate. The use of lowercase "origins" in the original report threw me and I wasn't thinking.

Convention appearances can often be very revealing, as celebrities don't realize microphones are on, or are just having so much fun interacting with fans that they don't particularly care.

And that's how we get our latest bit of Dredd sequel news: that, in fact, we could see a Dredd story based on the "Origins" storyline from 2000AD.

Here's what Jake over at Shallow Graves got when talking with star Karl Urban at Chicago Comic Con:

I had to ask, "Is there a possibility of maybe getting to see the dark judges in Dredd 2 or beyond?" He stopped what he was doing, and it was evident I struck the geek mark because his eyes lit up and he smiled as he answered, "Why yes, there is a definite possibility. But, it is more likely that we will do the origins story with Dredd trekking through the cursed earth to find the first Chief Judge Fargo."

Fargo, in the comics, is the man from whom Dredd was cloned. Fargo's face, which had been seen prior to this revelation, was never seen again after their relationship was revealed, as part of the ongoing campaign to protect Dredd's face from being seen by the audience.

He did not appear in Dredd.

Fargo appeared in the '90s film adaptation, played by Max Von Sydow, and in that film took the Long Walk into the Cursed Earth (a retirement rite for Judges) in order to obtain a pardon for Dredd, who had been wrongfully convicted of a crime committed by another clone.