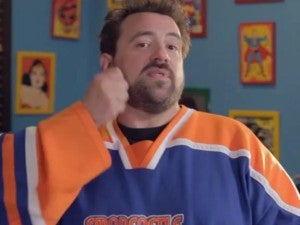 Continuing a promotional campaign tie-in between Gillette and Man Of Steel, Kevin Smith has offered up his theory on how the Man Of Steel shaves. As a long-time comic book fan, Kevin Smith addresses the elephant in the room right off the bat. Kevin Smith acknowledges that there was an explanation provided in the comic books involving Superman reflecting his heat vision back at his face to shave, but he doesn't buy it. Other theories that Kevin Smith discounts as not being valid include a Kryptonite razor, comets to the face, magic, and Kryptonian technology at the fortress of solitude. The theory that Kevin Smith stakes his reputation on is that Superman takes a piece of metal from his rocket ship. Smith says, "You've got something that's sharp enough from a different planet, and you can take it right off, take it right to the skin." All the theories on how Superman shaves can be found at HowDoesHeShave.com. The Man Of Steel is scheduled to open in movie theaters in the United States on June 14, 2013.