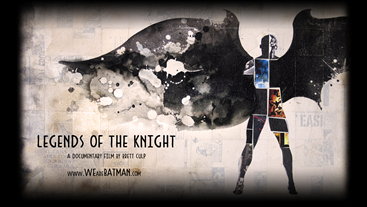 The filmmakers behind the Batman documentary Legends of the Knight have released a trailer for their film, which you can see embedded below. UPDATE: The clip originally attributed to the movie was included in error. There is a fuller explanation below, and the clip has been included for clarity and because it's an interesting clip. A look into the impact that Batman has on the real lives of individuals who follow his fictional exploits, the film features such high-profile Bat-fans as: The Dark Knight producer Michael Uslan, longtime Bat-family editor Denny O'Neil and Gotham Chopra, the author of Seven Spiritual Laws of Superheroes and son of best-selling author Deepak Chopra. You can check out the trailer immediately below, along with some words from the filmmakers. The film launches its theatrical roadshow release in February.

0commentsLegends of the Knight - Official Trailer

from Brett Culp Films on Vimeo. LEGENDS OF THE KNIGHT weaves together the stirring true stories of individuals who have overcome devastating obstacles, unselfishly given to the community, and embraced their inner superhero because of their love of Batman. Through the deeply personal tales of Batman fans, writers, and filmmakers, this feature-length documentary, by acclaimed filmmaker Brett Culp, explores the power of heroic stories and encourages viewers to find their own path to heroism. Funded by over 1,100 contributors from around the world, LEGENDS OF THE KNIGHT is a return to our childhood dreams of being a hero. Each one of us has the ability to overcome our own challenges and to make a positive difference. You can also check out a recent clip, which features O'Neil talking about the success of the 1966 Batman TV series and its long-term impact on the storytelling in the comics, below. While we first reported that it was part of the movie, the filmmakers reached out to correct us. It appears to be a clip from a longer interview with The Comic Archive, which somehow ended up included in a press release for the film.