Back when Man of Steel was in theaters, a great number of our readers reached out to us to ask whether we had heard anything about Christopher Reeve supposedly making a stealth "cameo" in the film. When Superman is about to destroy the World Engine, in a scene that's a pretty clear homage to the old Fleischer cartoons (see image below), there's what appears to be a distortion to his face. Many fans thought Cavill's face was briefly, digitally replaced by Reeve's in an homage to the actor who defined Superman for a generation of moviegoers. Our inclination is to say that's not the case, but there's no solid evidence one way or another. Watching closely and in high-def, it seems as though Cavill's face just looks more like Reeve's when he's in that sequence, with special effects and probably high-powered fans blowing on his face. What seemed in the theater like a half-second is actually a longer period of time during which there's not one particular shot where he looks more like Reeve than others to us, so it seems unlikely to have been digital manipulation. 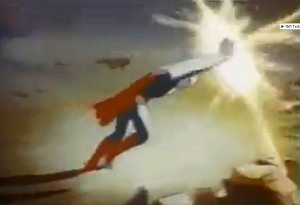 But, just to be on the safe side, we checked with the video commentary track that runs alongside the movie on the Bonus Disc included with the Blu-ray, out tomorrow. And the commentary was...silent on the matter. In fact, director Zack Snyder was talking at the time, so it seemed like there was some promise. After all, since he was handing things off to actors and effects people throughout the commentary, it seemed unlikely that they would be the ones to break such a story when Snyder had declined previous opportunities to comment on it. Just before the scene in question happened, though, Snyder began to praise Hans Zimmer's score and to talk about the importance of music in film. Muting the audio tracks for the effects and dialogue, Snyder talked over about a minute of movie when fans could hear nothing but Zimmer's score, and by the time he was done with that and ready to move onto other things, the controversial moment had passed unremarked-upon.