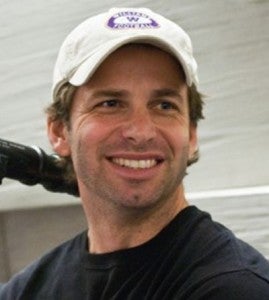 According to director Zack Snyder himself, the Man Of Steel is the most realistic movie that he has ever made in his life. Of course, considering that Zack Snyder's previous directing jobs have included such films as 300, Watchmen, Dawn of the Dead, and Sucker Punch, we're pretty sure that fans can expect a lot of fantastical elements to Man Of Steel even if it's Snyder's most realistic film. In an interview with CP 24 in Toronto, Zack Snyder explains, "The biggest challenge is sort of getting that mix of sort of realism, and it's Superman, so you know there's a guy that can fly and lift up cars and do whatever. But then you try to do that in a real setting, like out in the streets and in a real feeling world. And that mix is hard, because you're always constantly trying to maintain the reality of physics. But what would really happen if you got hit with a car…so that was the thing we had to make sure we were getting right." An interesting reveal during the interview comes from the interviewer himself, as the Man Of Steel apparently screened for many in the Canadian press yesterday. For the first time, fans get to hear what someone not attached to the production of the movie feels about Man Of Steel and how it relates to Superman's mythology. The interviewer says, "How much artistic license is made with this Superman story? Because I would tell you that it's not exactly the same, I don't feel betrayed, personally having seen it, I don't feel betrayed." Zack Snyder replies, "Yeah, I'm a bit of a fan, so it was really important to me that the canon be respected, the Superman canon, like what the mythology of Superman [is] be respected as much as possible. So we did try to hit all the highlights, as they say, but we also tried to make it our own." The Man Of Steel is scheduled to premiere in movie theaters in the United States on June 14, 2013.

Man Of Steel Is Realistic And Respects Superman Canon