A new photograph (seen at right) 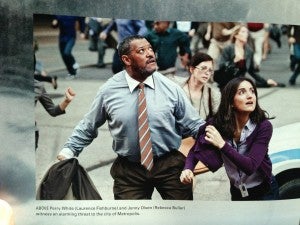 taken from one of the official Man of Steel tie-in books shows Perry White and Jenny Olsen running for cover during Zod's attack--effectively marking the first official confirmation that actress Rebecca Buller will play the controversial character. Controversial, of course, because in the Superman comics there is no "Jenny Olsen," although his longtime pal Jimmy Olsen is notably absent from the film. Once somebody noticed that Buller was listed as Jenny on IMDb, a debate grew out of it, with some fans assuming that they had gender-swapped Jimmy Olsen while others thought that the reports might not even be credible, given that IMDb is user-generated and sometimes prone to errors on movies not yet officially released. Warner Bros. has not officially commented on the Jimmy/Jenny question yet, although a source close to production recently claimed that the two were not the same character. "What I can tell you though, via my source close to the movie, is that Jenny will NOT be replacing Jimmy in the movie. Jenny will be Jimmy's sister," wrote Jake Lester at CBM, the same site that found this photo. This isn't the first time that there's been some sibling confusion in the Olsen household. On Smallville, of course, actor Aaron Ashmore played Henry James "Jimmy" Olsen, a Daily Planet photographer and friend to Lois and Clark. Over the years, many fans noted that he seemed too old to be "Jimmy Olsen," traditionally known as a younger character than the rest of Superman's cast. That issue was resolved when he was killed at the end of season eight of the series; it was later revealed that Jimmy had a younger brother named James Bartholomew Olsen, who would turn out to be the Jimmy Olsen with whom fans are familiar.