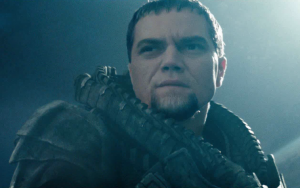 In a new interview with Total Film Magazine, Man of Steel villain...well, star anyway...Michael Shannon told the interviewer that his character really isn't as bad as all that. "He's not a villain," Shannon told the magazine. "He's not a villain any more than any other General fighting to protect his people. He doesn't like to just hurt people and steal diamonds; he's focused on being successful at his job." He added that he's not particularly inspired by the way Terrence Stamp portrayed the character--not that he doesn't think Stamp did a fine job, just that it's not the same version of the character that Shannon was interested in playing. "I think the way Terrence Stamp approached it - and this isn't any kind if criticism of his performance - there was something kind of detached about it," Shannon said. "Pure, hatred, rage, whatever... I think this is more ambiguous."

Man of Steel Star Shannon: Zod's Not a Villain