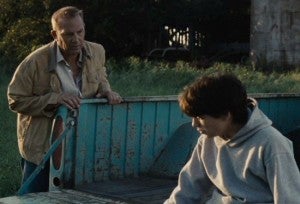 Spoilers ahead for Man of Steel, in theaters now. Alright, so now that Man of Steel has been out for a few days, it's probably pretty safe to assume that everyone knows--whether they've seen it or not--that the movie has people talking. "Talking." And on the Internet, that means screaming, venting, vamping, arguing. Why? Well, there are a handful of reasons. This movie contained some scenes that outraged a number of viewers--and even if the viewer in question was on board with the movie, some of them raised uncomfortable questions that really just didn't seem to be answered satisfactorily. So what's everyone up in a huff about? We'll tell you. "Maybe" This one started before the movie ever got to theaters, but there were a fair number of people who thought it would play better in context. Generally speaking, those people were disappointed and Kevin Costner's portrayal of Jonathan Kent has drawn some fire for being a little TOO human and not quite saintly enough. "I think you just have to understand that I'm human and I have two thoughts; one, selfishly, I want my son to live and I don't want him to be taken away from me. So that's the human part of Jonathan," Costner told us in an interview two weeks ago. "It's the real part that you wouldn't–you know that he would be taken away. So he's guilty of saying that. I think it's a good moment for the film because I think every time you're more real–even though it's something you wish you didn't say, I think that raises the stakes of the movie." It certainly raised the stakes for his character, as his desire for Clark to have a relatively normal childhood led directly to... 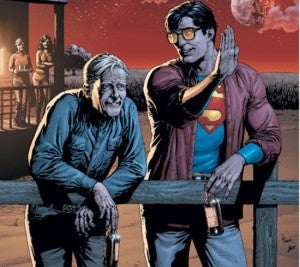 The Death of Jonathan Kent There's no heart attack like in Superman: The Movie. He isn't killed by a Supervillain like in Geoff Johns's Brainiac story. He doesn't die in...whatever way he's supposed to have died in the New 52... No, in Man of Steel, Jonathan Kent allows himself to be swallowed up by a sudden, vicious Kansas tornado (which is why the tornado in question couldn't have been edited around), telling his son not to save him, lest he reveal his powers to the world. There are a few things at play here; first of all, it's not clear exactly to what extent Clark knows about his powers at this stage. Obviously he can't fly and we're not sure that he has super-speed. It could be that the only way they're aware he could save his father is with a "frontal assault," running in and dragging him back, which would certainly arouse suspicions. That said, if the speed power has begun to develop already, it's difficult to imagine that Clark couldn't have drifted to the back of the crowd and slipped around the overpass, using his speed to appear behind his father and pulling him to safety in another direction. Or, as Ralph Garman suggested during one of his many rants about the film on Fatman on Batman, maybe this was just the time for Superman to come out.

The Battle of Smallville/The Battle of Metropolis These are really two different things, but ultimately they get kind of categorized as one general problem with the film's action scenes. In the Battle of Smallville, there are two main complaints: 1.) Superman is upset that they're threatening his mother, so he goes to the farm, grabs Zod and hightails it away from the house--leaving his mother standing there with three Kryptonian soldiers. That's...not sound strategy. 2.) He grabs Zod and plows through the relative solitude and safety of a corn field and pummels him through a mile and a half of deserted farmland until their progress is stopped by a city street, where they and the U.S. military proceed to break everything in sight and put civilians in danger. The safety of bystanders is somewhat less of a concern in Smallville, where things look generally abandoned, than it is in the Battle of Metropolis, where that was a HUGE problem for many of the film's critics. A disaster analyst projects that the second battle, which took place in the heart of the city, would have cost about 129,000 lives and a long-term economic impact of $4 trillion. And a lot of fans are willing to lay that at Superman's feet, with a number of people online, including some comics professionals, calling him a "homicidal maniac." I take issue with this a bit: Most of that was due to the Black Zero/gravity drill, which frankly was beyond Superman's control for the most part. He could have gone after the one in Metropolis first, which is a solution some people have suggested, but the environmental damage to the planet would have continued until he flew around the world and destroyed the World Engine. The Black Zero was a slave to the World Engine's programming at that point, meaning that destroying the one in the unpopulated area was actually the wiser course of action, as the Black Zero couldn't continue its attack on Metropolis effectively without the World Engine up and running. Additionally, Superman's presence at the scene of the Black Zero would likely have caused more alarm than the handful of humans who, as far as the Kryptonians knew, were essentially gnats. That could have made it more difficult for the singularity to be deployed and the Kryptonians to be blasted into the Phantom Zone/oblivion/whatever. The point, though, of the objection is that Superman didn't do anything to take the battle away from the city. I assume this means AFTER the Black Zero is turned off and sent away, and it's down to just Superman and Zod. During that time, there's far fewer skyscrapers being knocked down, although still quite a bit of property damage and potential loss of life. 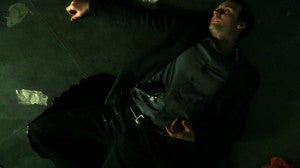 The Death of General Zod Pictured at left is the apparent death of General Zod from Smallville, lest anyone be confused. He got better. The brutality of the film's lengthy climactic battle coupled with the hands-on nature of Zod's death has really traumatized a lot of people; you can argue that Superman has killed Zod in other media--the Donner films, the comics--but always with a bit of detachment, never really getting his hands dirty. There was that same kind of aloofness, for example, about the way the Phantom Zone criminals are done away with in Superman II that you had with Batman Begins. "I didn't kill him--I just didn't save him." That kind of thing. And of course there's an alternate cut of the film where the Kryptonian villains are shown to survive, as well, which further clouds the issue. There was no ambiguity here, though; Superman, faced with the prospect of Zod continuing to slaughter people for the rest of his life (beginning with the family directly in front of him at that time), snapped Zod's neck, broke Mark Waid's heart and sent the comics Internet into the kind of frenzy we haven't seen since...well, since the last time something unexpected happened, about a week ago. The Comics Internet is really good at frenzies. Droning On... This one's funny becuase it's actually quite evenly split; I've heard a number of people, including those who didn't love the movie, saying that they really enjoyed the scene at the end of the movie with the drone. Others have called Superman a prick and a self-centered jerk for destroying government property "just to say he could." I'll go out on a limb, though, and guess that most of those people wouldn't be saying that if they'd liked the rest of the movie.

Man of Steel: The Five Most Controversial Scenes