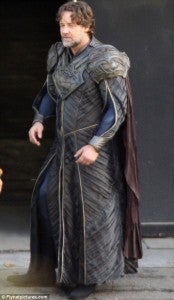 In a new interview promoting Les Miserables, Man of Steel star Russell Crowe did his best to give fans a little tidbit of information about the way he's playing Jor-El, Superman's Kryptonian father, without actually giving away the game. "Well now you're putting me on the spot, and I would be the only person in the world to talk about it if I talked about it, wouldn't I?" Crowe said in a conversation with MTV Geek. "Thanks very much for that noose around my neck. How can I say this with out getting too specific about it? It afforded me a wonderful job to put specific thing in the minds of 14 year old boys, and that is the bravest thing that you can do, the most important thing you can ever do, is love." That's not much of a surprise to fans who know the mythology; Jor-El has been at various times depicted in a number of different ways, but the common thread is that he's willing to sacrifice everything he has left to ensure his son survives the Kryptonian cataclysm. Man of Steel will be in theaters on June 14.