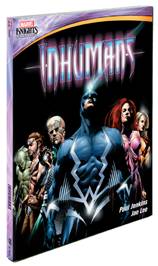 There's a review of Marvel Knights: The Inhumans on DVD buried in here somewhere, but there's a lot of context for the release, too. So bear with us. With the release of Infinity coming soon, Marvel's The Inhumans are set to become a key part of the Marvel Universe in a way that they haven't been in a very long time. Black Bolt and his teammates are expected to step front and center during that story—an interesting choice considering how many of the recent standouts at Marvel have had their own movie deals in place. (And the fact that Stan Lee and others have suggested that The Inhumans are going to have a movie developed sooner than later, too...) In any event, it seems like a perfect time for a release like this, but it's obviously always an uphill battle for these Marvel Knights DVDs to get noticed. Why? If there's an area where DC Entertainment have consistently outperformed Marvel, it's in the form of their animated feature films. Television, too, arguably—but it's been a while since DC/Warner has had a legitimate ratings success on TV, whereas Disney XD is enjoying Ultimate Spider-Man quite a bit, even if fans are pretty critical of it. In any event, Marvel's animated feature films have left something to be desired. It's been years since the popularity of Ultimate Avengers, and a number of the movies they released, even around that time, weren't universally beloved. Meanwhile, DC has launched their successful DC Universe line of films which, about 2/3 of the time, directly adapt comic book stories rather than just telling "a story with Superman in it," which had been the practice in the past. Marvel has also been releasing some direct-to-DVD animated projects in the form of motion comics. Featuring rudimentary animation along with a music score and voice actors, "motion comics" is basically a fancy word for the kind of animation that came out of Marvel in the '60s but has been mostly discarded since then. Those old cartoons have a bad rap, but they're some of the "truest" adaptations of comic books made for years, since the art form was largely considered disposable and for kids, and since many writers and animators would choose stories that worked better for TV rather than try to accommodate the existing tales. Were they poor in quality? Certainly—but they have their fans, as do the motion comics releases that Marvel have done. And there's a good reason for that; Marvel has selected the comics carefully and has cast the films pretty well. Nothing like DC's high profile release of Watchmen as a motion comics DVD around the time of the movie release; that project was a disaster that could by its nature appeal only to the hardest or hardcore fans because the one man doing all the voices was not at all suited to the task. Marvel has no such problem in The Inhumans, out last week and based on the Eisner-winning Marvel Knights story by Paul Jenkins and Jae Lee; their casting is strong, and while you don't get the famous voices that exist in the DC animated features, it gets the job done. Even just the animation itself, while still pretty basic, is worlds better than those old precursors. Visual effects and even just the nuances of things like fully moving characters and fully rendered backgrounds make the page come to life, and frankly the look of these films is no worse than what you see on many cheaply-animated series on The Hub or Adult Swim. Even something like Archer has a lot of similarities to these motion comics. The fact that it's split up into "issues," and so each one runs for only fifteen minutes or so, really keeps that same feeling alive. The story is compelling even if the animation isn't, and the chapters are so short that it's not like you're watching the simple animation for two hours at a clip...or at least, if you are it's probably because you really, really like the story, so who's complaining? All in all, this is definitely worth the (pretty modest) price of admission. Check it out for the story alone, which is a terrific one. Personally, as much as I love the DC Universe movies, if there's one consistent criticism I have of them it's that I'd like to see them look a bit more like the comics. That's not an issue here, and Jae Lee's work is beautiful...even in limited motion.