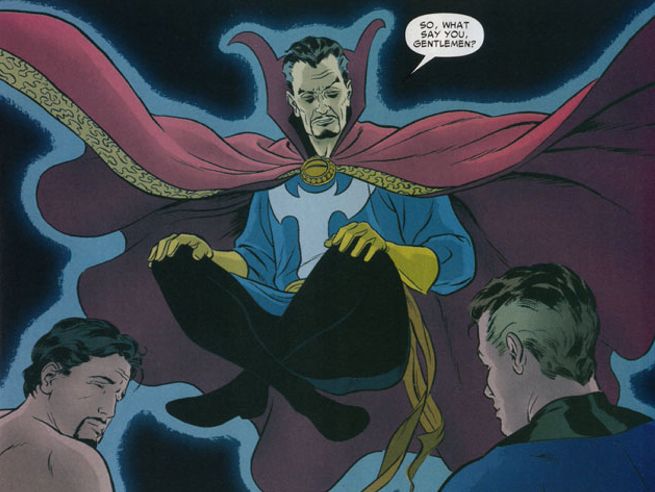 URL registrations can be a window in to the mind of a Hollywood studio. sometimes. They can even give away concrete information, such as when Sony registered Skyfall just days before announcing it as the official title of their next James Bond film.

As spotted by Stitch Kingdom, and posted to their Twitter account, Marvel recently registered SorcerorSupreme.net as a Doctor Strange-related URL. That makes sense, it's his alias, it's a good top-up to their URLs as they set about pre-production on the Strange movie.

But now they've also registered LevitationCloak.com. Why single the cloak out particularly? They may just be covering themselves with this URL (pun intended, I'm here all week, try the soy patty, tip your waitress) or there may be some other, specific reason.

Perhaps Stephen Strange's cloak is a big, big deal in the movie. Maybe it's the studio's big merchandise hope for the film. We could be just two years away from seeing everybody under 4 feet tall, and a good number of those taller, running around with their own yellow pseudo-Strange cloaks flapping from their shoulders.

Anyway, LevitationCloak.com leads absolutely nowhere right now and most likely won't yield an interesting result for months, if not years, but it's still an interesting little registration on Marvel's part. I don't see URLs for Pym Particles, Arc Reactor or Hadron Enforcer, do you?

Marvel Registers Doctor Strange URLs, Including One Just For His Cloak Of Levitation