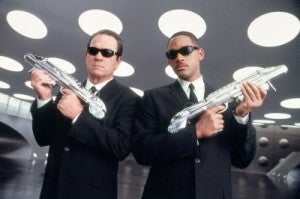 It's Memorial Day weekend, traditionally a good opening weekend for a summer blockbuster franchise film, and we've got a couple of them vying for the top spot this weekend in reigning box office champ The Avengers and newcomer Men in Black 3. Failing an absolute collapse for Will Smith and company, though, taking the box office crown from a movie in its fourth week of release really shouldn't be that much of a challenge. Estimates from Box Office Mojo are reflecting that, as well, with the threequel slated to take in $84 million over the four-day weekend; that's twice as much as The Avengers is expected to make (although $41 million and change is still enough to earn it second place and to elevate its already-spectacular cumulative box office). It's been more than ten years since moviegoers last got a good look at the Men in Black, and it seems that long since 2008, when Smith's Seven Pounds disappointed at the box office and he began to focus on his production work and promoting his son's acting career. Smith, one of the most consistent box office draws in recent memory, has rarely had a movie that didn't open at #1, and nobody credibly believes that this weekend will be another exception. Adding to the film's already-substantial appeal is the opportunity for fans to get a first look at Sony's other big summer tentpole film, The Amazing Spider-Man, which comes out in just over a month. A six-minute "special preview" of the superhero reboot will be attached to screenings of Men in Black 3 in IMAX 3D this weekend.