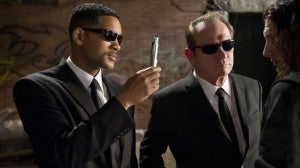 In spite of a domestic opening that didn't exactly set the world on fire, Sony's Men in Black 3 has made almost $600 million globally, making it the highest-grossing Men in Black movie yet. The first film made $589.4 million during its theatrical run, compared to a $441.8 million global take for Men in Black II ten years ago. What's most interesting is that in a reversal for most American tentpole films, Men in Black 3 has made more than 2/3 of its money--over $429 million--overseas, compared to less than $170 million in the U.S. The film missed projections on its opening weekend and only unseated The Avengers as the country's #1 movie because the superhero team-up was in its fourth week of release.  The next week, the Will Smith-powered sequel was overtaken by Kristen Stewart's Snow White & the Huntsman.