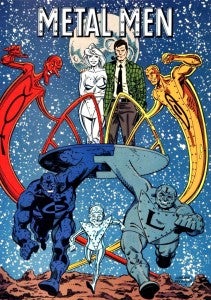 Months after it first leaked in an interview that filmmaker Barry Sonnenfeld was working on adapting a Silver Age comic book series for Warner Brothers, Vulture has discovered from anonymous sources that the property in question will be DC's Metal Men. Metal Men, briefly, is the story of a scientist and the six android superheroes he created, each bearing the name and properties of the element of which their shell is constructed (and personalities to match). The characters have a strong following among hardcore DC fans on the Internet, but have had a hard time maintaining an audience for an ongoing series. The most recent attempts at giving Metal Men a book of their own haven't even been solo titles, with the characters starring in "Second Features" in the Doom Patrol's 2009 series, as well as being one of the strips featured in DC's Wednesday Comics anthology title. In 1996's fan-favorite Elseworlds story Kingdom Come, The Mental Men were reinvented as Alloy, a giant robot that seemed to operate independent of the personalities of the individual Metal Men as a giant killing machine. Because Alloy later made an appearance in the DC Universe's pre-Flashpoint continuity when the Metal Men were being manipulated by Maxwell Lord in his vendetta against the Justice League International in Justice League: Generation Lost. On film, The Metal Men have previously appeared on Cartoon Network's Batman: The Brave and the Bold as well as briefly in the film adaptation of Darwyn Cooke's graphic novel The New Frontier. Rumors of a Metal Men movie have been floating around for a while now; it's one of a handful of lesser-known DC properties that have been mentioned in interviews in the past, but never singled out and never in any specific way that led fans to believe a film was forthcoming. Sonnenfeld, best known to most fans as the director of the Men in Black movies, has also worked on projects like Get Shorty, the live-action version of The Tick and Bryan Fuller's Pushing Daisies. He revealed to Comic Book Movie in May that he was developing a DC property for Warner Brothers.

Metal Men Movie From Men in Black's Sonnenfeld on the Way