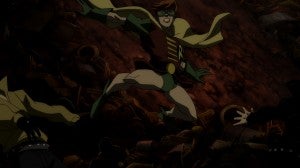 Ariel Winter, one of the stars of the Emmy-winning Modern Family, identifies herself as an avid reader who'll pick up a comic anytime she has a chance. "I go into comics stores and I can be in there for hours," Winter said. "It's truly amazing when you open a comic book, because you're immediately sucked in from the first line. The writing, the graphics, the artwork – it makes you feel like you're inside the story." She also self-identifies as someone to whom female empowerment is very important, and for whom it's a privilege to play the first female Robin in Warner Premiere's Batman: The Dark Knight Returns, Part 1, which comes out on Blu-ray and DVD tomorrow. 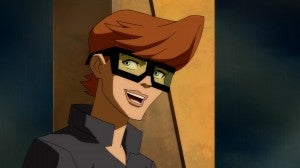 "It's really cool to be the first female animated Robin," said Winter in an interview released by Warner. "There's been so many amazing boys, but I think I can just bring something new that the fans have never experienced. So I'm really honored to be part of such a fantastic project. She added, "Female empowerment really is important to me. I'm a big nerd of the books from the 15th  Century and 16th Century, when the men had all the power and the women had none of it. So to have Robin be a girl is cool because it gives girls a chance to know that they can do everything boys can do, and even better. No offense (laughs), but it's true." She plays Carrie Kelly, of course, the Robin of Frank Miller's seminal Batman work. It's an Elseworlds story, in which Kelly was introduced and became a fan-favorite. She's arguably one of the great non-canonical characters in DC's history, ranking right up alongside the characters in Watchmen and Norman McCay from Kingdom Come. 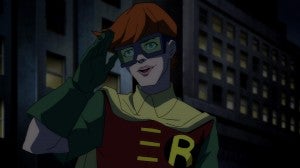 And she finds a certain kinship with the character. "Carrie and I share a lot of characteristics," Winter said. "We both like crime fighting. We both like Batman. We would both blow off school for crime fighting. (giggles) Actually, no, I would do my school during the day and then crime fight at night. "It wasn't really hard getting into Carrie's mindset because I've always wanted to play the sort of Tomb Raider, Kick-Ass role where the girl is really the brains behind the power. So I was excited when I got to do it. I just devoured the script. I was surprised. It was pretty violent. I read it and I saw some of the things and I was like, 'Woah! That is so cool.' I'm a big fan of that action, thriller sort of thing, so it was exciting for me to read." Winter will be walking the red carpet at the premiere of Batman: The Dark Knight Returns, Part 1 later tonight.