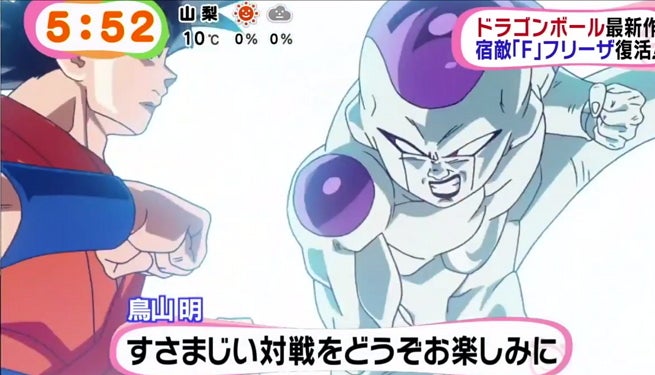 See the footage below:

Text: The old enemy wished for by Dragonball fans.
Narrator: The latest footage from next year's Dragon Ball Z: Fukkatsu no F film has arrived.
Piccolo: He became a monster from another dimension and came back!
Vegeta: What is going on!?
Goku: Frieza!!
Frieza: Let me show you... My next evolution!
Narrator: Akira Toriyama, who is writing the scripts, brought back Goku's old enemy Frieza. Frieza is very popular among fans, and the film will be filled with so many action scenes that Akira Toriyama has called them "fierce."
Text: Akira Toriyama - "Look forward to a fierce face-off."

And here's a description of the film's story, which ANN translated from Weekly Shonen Jump:

An Earth where peace has arrived. However, remnants of Frieza's army Sorbet and Tagoma (from the Japanese word for 'egg') arrive on the planet. Their goal is to revive Frieza with the dragon balls. Their dastardly wish is granted, the "F" that plans its revenge against the Saiyans is revived...!

The film opens in Japanese theaters on April 18.